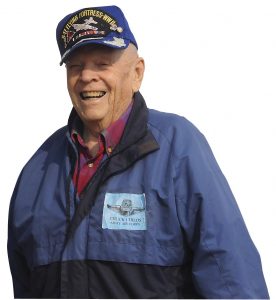 One doesn’t normally see percussionists sitting down while performing, but this is no ordinary percussionist. And Monday’s Box Car Days Fly-In/Drive-In pancake breakfast was no ordinary pancake breakfast.
World War II veteran Chuck Childs was the guest of honor at Monday morning’s annual event, and after standing alongside Homer Dobson to be recognized, Childs returned to his seat in the percussion section of the Community Band.
“He is a great, great hero in American history,” Dobson said. “Thank you, Chuck, for all you’ve done for this country.”
Childs, 97, has lived at O’Brien Court for only a couple months after moving to Tracy from Rapid City, S.D. He said he was well-known in Rapid City, but isn’t so much here, at least not yet anyway.
“I’m shocked to be the honored man,” he said. “I’m pleasantly surprised at this.”
Childs entered the service in 1940 as a private in the 164th Infantry in North Dakota. In 1941, he graduated to the Army Air Corps as an aviation cadet and trained to be a pilot.
He received his pilot’s wings and a rank of 2nd Lt. in July 1942. He eventually would become an instructor for both British and American cadets. He flew a B-17 bomber in combat against the Nazis.
In all, Childs flew in 37 missions in enemy territory.
“He risked his life again and again,” Dobson told the audience at the Fly-In/Drive In. “He flew into Italy, Yugoslavia, Czechoslovakia, Austria, Poland and Germany.
Childs retired from the military in 1961. He also flew missions in the Korean War.