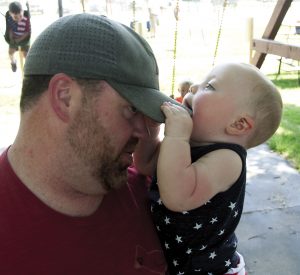 It might have been a bit scaled back because of COVID-19, but the city of Currie did its best to honor America by celebrating Independence Day as best it could Saturday

The show didn’t go on as usual in Currie on the 4th this year, but it did go on.

While COVID-19 wiped out the Currie Town & Country Booster Club’s street dance this year — the group’s major money-maker — it fell short in taking away the spirit of Independence Day in the small town. The Currie Town & Country Booster Club Membership Drive Picnic went on as scheduled Saturday, as did the sand volleyball and bean bag tournament. And what 4th of July celebration would be complete without a grand fireworks display? Once again, Currie didn’t let anyone down and maintained its reputation as hosts of one of the grandest fireworks spectacles in the area.

“It’s a time when everybody can get together,” Currie Town & Country Booster Club President Ed Sweetman said. “Everybody enjoys it, and we have a great bunch of people who help put this together, so that makes it easy. “We wanted to do something even thought things are being shut down.”

“People have said that they feel there’s a little bit of normalcy going on here,” Thomas said Saturday. “They are glad we had this; people are sitting together with their family. Everyone is glad we still did it.”

“It just stopped,” Sweetman said. “When the bars were down, we took in zero. That’s a huge amount of money. It’s gonna be tough; we’re gonna be down this year.”

The pull tabs, however, have been generating a fair amount of money since bars and restaurants have been allowed to open back up to the public.

“If the bars stay open, I don’t think donations will be down,” said Currie Town & Country Booster Club Gambling Manager Amy Loosbrock. “Out of 2,000 sites, we are 248th for charitable gambling.”

The membership drive picnic offered its usual fare: hamburgers, hotdogs, potato salad and chips, as well as to-go containers for those who wished to avoid any type of crowd. DJ Cody entertained the crowd with music throughout the afternoon as well. Organizers of the 4th of July event did what they could to follow social distancing recommendations, and sanitizers were available.

“They moved the tables, so they were being careful with what they’re doing, but everybody is enjoying it,” Arnold said.

The Currie Town & Country Booster Club is actively seeking members; the group raises money throughout the year and has donated money to such things as local schools and food shelves, and agencies in Murray and Lyon counties, including the Tracy Area Food Shelf, Hospice of Murray County, the Marshall MS Walk, CCSI of Worthington, the Currie Fire Department and American Legion, ALS Association, Salvation Army, Let’s Go Fishing and the Out of the Darkness Suicide Prevention program. The Currie Town & Country Booster Club also sponsors the annual fireworks display in Currie.

This was the second time in three years that the street dance was cancelled (2018).

“Next year everything will be bigger and better,” Loosbrock said.

“And we’re adding a few events next year, too,” Thomas added.

See this week’s Headlight Herald for more photos from Currie.