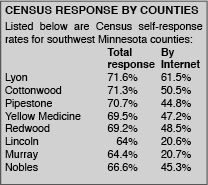 Minnesota continues to lead the nation when it comes to 2020 Census reporting.

The national 2020 Census self-response rate stands at 62.6%, but here in Minnesota, the response rate is at 72% — the highest in the nation.

The results are as of responses received through July 21.

“In 2010, Minnesota finished second in self-response, just behind our neighbors to the east in Wisconsin, and we have traditionally done quite well in self-responses,” said Sam Fettig, the Minnesota Census partnership coordinator.

Minnesota has three counties — Carver, Washington and Anoka — among the top 10 counties in the country. Wisconsin, which ranks second behind Minnesota with a 69.1% response rate, boasts the top three county rankings, and four of the top five.

The lowest-responding counties in Minnesota were Aitkin, Cass, Mahnomen, Lake of the Woods and Cook counties, all of which came in at under 40%.

The first 2020 Census mailings were sent out on March 12; the Census has sent out a new postcard reminder to households that have yet to respond to the Census. Those homes should receive the postcard this week if they haven’t already.

Despite Minnesota’s high rate of return, more than one in four households have yet to respond.

“We know that within our overall high level response rate, there are some pockets within the state that are not responding at as high of a rate, including some parts of Greater Minnesota, for a variety of reasons — whether that’s Internet access, or delays in receiving a Census form because of the COVID-19 pandemic,” Fettig said. “We still want to make sure that we get a complete and accurate count.”

Enumerators will begin visiting homes that have yet to respond on primary day — Tuesday, Aug. 11. Fettig said anyone who hasn’t returned their Census form and would like to avoid being visited by a Census-taker during the non-response follow up period, still has time to do so. The Census Bureau will wrap up data collection on Oct. 31.

“Census-takers will have a list of addresses in their area that we don’t have a recorded response from yet,” Fettig said. “They’ll knock on the door, leave a note if no one answers and will try back a number of times to try to get that complete and accurate count.”

There are two different phases for result tallying. The first is at the state level, where data are used to determine the number of seats in Congress; those numbers originally needed to be delivered by the end of December, but the Census Bureau has put in a request to Congress to extend that deadline to April 31, 2021, because of a delay in Census operations caused by the response to COVID-19.

The second phase is for local-level data, which are used to draw district boundaries for congressional and state House seats, as well as even more local level data, used for things like city council and school board seats. Again, a request for that deadline to be pushed back from April 1, 2021, to July 31, 2021, has also been made by the Census Bureau.

Fettig said it’s too early to tell if those deadline requests will be approved, but is hopeful they will be.