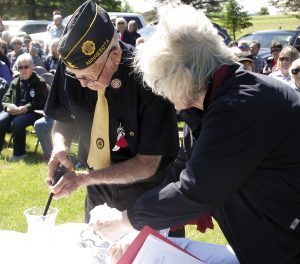 In addressing a large crowd at the Memorial Day service at Bethel Cemetery on Monday on a picturesque morning, Pastor Chuck Swanson spoke about one reason why it’s so important that American soldiers have given of themselves to fight in wars: the Constitution.

Swanson, pastor at the Garvin Congregational Church, said all soldiers take an oath to defend the Constitution, because without it, Americans wouldn’t enjoy the freedoms and liberties they do today.

“We have a rather unique Constitution,” Swanson said. “The preamble of the Constitution reads, ‘We the people of the United States, in order to form a more perfect union, establish justice, ensure domestic tranquillity, provide for the common defense, promote the general welfare and secure the blessings of liberty to ourselves and our posterity, do ordain and establish this Constitution for the United States of America.’”