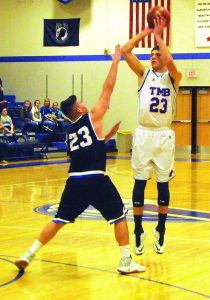 If history tells us anything, it’s that many records stand the test of time.

A season removed from the Tracy-Milroy-Balaton boys’ basketball scoring record falling, it tumbled again in the first half of the Panthers’ 64-62 win at Lakeview on Thursday night when Spencer Smith swished a three-pointer from the left wing to bring his career point total to 1,700, passing Josh Kirk’s 1,699 points.

Smith, who would go on to drop 35 points on the Lakers, once again scored inside and out Thursday against Lakeview, a team that beat the Panthers back on Dec. 9. The Panthers’ big man might have started out slow from the field, but he more than made up for it on his way to making school history.

“It feels good,” Smith said of breaking the record. “Josh and the rest of the team, they were great teammates (last year) and we had a great time. He knew I’m pretty sure that records are meant to be broken. He knew I was right behind him. He was glad for me and I was happy for him when he broke it.”

Look for more on Thursday’s game in next week’s paper.