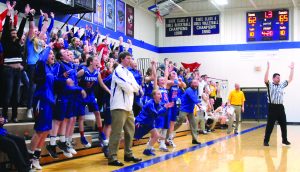 Kendra Ludeman shoots just about all of her three-point attempts from the baseline.

Who needs the baseline?

The senior forward, known more at Tracy Area High School for her high-jumping skills, sank a three-pointer from the top of the key to send Thursday night’s game against rival Minneota into overtime, where the Panthers — with their two new 1,000-point scorers and a starting forward on the bench — turned up their defense and eked out a 71-69 win to clinch the Camden Conference South.

“It felt really good — I knew the pass from Gabbie (Gervais) was going to be good, and I saw right away the screen was good; no one was around me, so I felt pretty confident,” Ludeman said of her big shot.

It was Ludeman’s only basket of the game.

“Kendra’s a very good three-point shooter,” TMB coach Derek Ashbaugh said. “We’ve got a ton of confidence in her.”

The second half of Thursday’s game was the sort of contest fans from both sides expected, but was in stark contrast to a sloppy, foul-filled opening 20 minutes. Any offensive flow that was mustered was continuously off-set by fouls, and it took both teams until nearly midway through the second half to find any kind of rhythm. For the game, there were 73 free throw attempts — 38 by Minneota and 35 by TMB. The Panthers actually made as many free throws (23) as they did field goals.

“I think it was two teams playing pretty good defensively,” said Ashbaugh. “Both teams did miss some opportunities, and things got a little sloppy — missed free throws, missed layups — but I think both teams were playing really intense. Things kind of cleaned up in the second half.”

The Vikings found ways to score inside and out on the Panthers in the first half and early in the second half, and their offensive movement resulted in a mountain of fouls against TMB, which would eventually end up costing them their two main scorers.

“All-around, defensively, we were lacking a little bit of energy in the first half, but I think in the second half we picked it up and executed a lit better,” Ludeman said.

The Vikings doubled their halftime lead of four on an inside basket by Lydia Sussner, who led Minneota (19-6, 12-3) with 26 points. Two and-1s — one by Evy Dolan and one by Kaylee Kirk — helped the Panthers quickly cut into the deficit, and a Kirk three-pointer at the 6:13 mark have them their first lead since the 8:44 mark of the first half.

The game stayed tight the rest of the way, but the Vikings were able to muster a 64-60 lead with :33 left on the strength of seven straight free throws. TMB was strong from the line as well, as two more from the charity stripe with :28 left made it a two-point game.

Minneota had two more trips to the line with under :26 left, but made just one of three chances, leaving the window open for the Panthers to tie it with a three-pointer. And that’s exactly what they did when Gervais found Ludeman at the top of the key for the big shot.

Ashbaugh said Ludeman was one of two options the Panthers discussed in the preceding timeout.

“She was the main option,” he said. “We tried a little screen-and-roll action, it wasn’t there, and Gabbie found her for the three. Ice water running through those veins.”

All those fouls eventually added up, leaving the Panthers without Kirk and Dolan for the last :33 of the regulation and the overtime period.

“That was crazy — I don’t think it’s ever really happened before with three out like that,” Ludeman said. “We still had a lot of confidence. I knew the girls on the bench would step up and play hard for us. I knew we wouldn’t let down.”

TMB (23-1, 15-1) wasn’t the only team dealing with foul trouble. Minneota lost freshman forward Morgan Hennen (11 points) with :28 left in regulation; then, in overtime, Charlie Josephson’s fifth foul — with the game tied at 69-69 after a big layup by TMB reserve Cassidy Smith — sent Gervais to the line, and the senior’s two clutch free throws with :13.4 to go would turn out to be the game’s deciding points.

After Gervais’ free throws, Minneota hurried the ball past half court, then called a time out to set up its final play, but a desperation shot with at the buzzer was partially blocked by Sidney Karbo.

“Couple possessions, couple free throws here or there — both teams were probably thinking the same thing ,” Minneota coach Chad Johnston said. “They had girls in foul trouble who fouled out; they were sittin’ in the same boat we were. They hit a key shot at a key time with some of their better scorers on the bench, and when we needed something set up, I got two of my top scorers on the bench. Big difference is, they made the shot they needed to at the right time.”

Dolan led the Panthers with 29 points and 13 rebounds. Kirk had 17 points and seven steals and Syd Lanoue — who joined Dolan and Kirk on the bench for the four-minute OT period because of a leg injury — finished with 10 points and eight rebounds.

TMB forced 29 Minneota turnovers. The Panthers had 18 steals, including seven by Kirk and four by Lanoue.

Ashbaugh was more than happy with how his team responded with three leaders on the bench during crunch time. He said if his  younger players were nervous in the overtime period, they didn’t show it.

“When your top three scorers are unable to finish the game and you’re still able to pull it out, I think that’s a huge confidence boost,” he said.”They seemed really poised out there.”