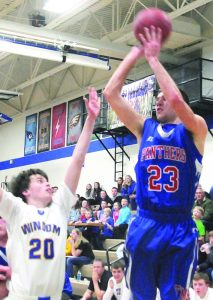 Most high school basketball players never make one shot big enough to get every home fan on their feet. On Monday night against Windom, Tracy-Milroy-Balaton’s Spencer Smith had four — three dunks and a buzzer-beating three-pointer that gave him 2,000 points for his career.

In a perfect world, Smith’s three-point heave at the end of Monday’s game would have fallen and the Panthers would have walked away with a win heading into tournament play, but while Smith would have loved nothing more than for his final shot on the home floor to have gone in, he and his teammates were nonetheless able to celebrate a milestone that has been reached by only one other player in school history.

‘’It’s something I really never planned on doing,” Smith said after his final home game. “It just kind of came to me, and once it did I was just as surprised as everyone else.”

Smith was 7-for-7 from the free throw line Tuesday and finished with 32 points. He now sits at 2,013 career points.

“It’s been a lot of fun the last two years,” TMB coach Rick Haberman said. “He got his 1,000th point last year, and then in Lakeview this year he got the school record, and tonight he got to 2,000. It would’ve been real sweet to have Senior Night, 2,000 and a victory, but it just didn’t happen.”

Smith’s big moment was set up perfectly. The Panthers took possession under their own basket with just a few seconds left in the first half, and Smith set himself up for a three-point shot from the left baseline. The ball, like it has so many other times this year, found its way to the bottom of the net, and the home crowd exploded nearly loud enough to drown out the halftime buzzer.

“It’s a great feeling to get to that number, but I couldn’t do it without my teammates,” Smith said.

Smith has been the Panthers’ offensive go-to all year. He is surrounded by younger teammates who have improved throughout the season, but with whom he had barely played prior to this year. In that respect, Smith has learned to lead by voice and by example, but for a few minutes Monday night, the moment belonged all to the versatile senior.

“Once it left my had it felt kind of good about it, but it was a step-back and I was a little worried,” Smith said of his big three-pointer. “But it went in and it was a great feeling.”