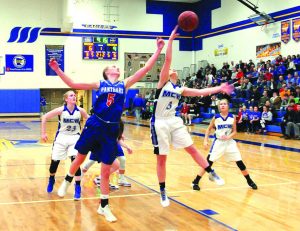 Seven minutes into Tuesday night’s Section 3AA tilt against Martin County West, the Tracy-Milroy-Balaton girls’ basketball team had as many points as turnovers. Funny thing about slow starts and this Panther team, however, is those rough patches don’t last long.
The Panthers eventually gained their composure and their defensive killer instinct en route to a 55-49 win that put them in Thursday’s section semifinals.
“We lacked some energy there throughout much of the first half,” TMB coach Derek Ashbaugh said. “But the girls fouight through it and did a nice job and eventually forced turnovers. Our defense gave us energy on both ends of the floor.”
TMB used a 15-1 burst to open up an 11-point lead, but MCW responded with a run of its own to trim the lead to three points by halftime. MCW kept coming in the second half and eventually took a 31-29 lead with 13:28 to go. TMB regained the lead on a steal and layup by Syd Lanoue at the 8:31 mark and then really poured on the defensive pressure.
The Panthers’ tough half court pressure sped up the tempo of the game and the result was mounting turnovers by MCW — five in a stretch where the Panthers outscored MCW 8-2 to build a 41-35 cushion.
MCW kept it close for the next few minutes, but Lanoue’s steal and two free throws made it 45-37. MCW got it back down to a three-point game with 3:38 to go, but layups by Kirk and Kendra Ludeman kept MCW at a distance. Kirk sealed the game with a pair of free throws with :39 left that pushed the Panthers’ lead to seven.
Evy Dolan, who missed the last game because of an ankle sprain played about 15 minutes.
“She’s hurting a little bit, but she was able to get the job done,” Ashbaugh said of his leading scorer.
Lanoue led the Panthers with 21 points, seven rebounds and seven steals, and Kirk had 13 points and six assists. Dolan scored 10.
TMB will play Minneota at 6 p.m. Thursday at SMSU.