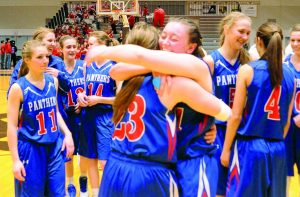 No coach is more aware of the havoc the Tracy-Milroy-Balaton pressure defense can cause, and on Thursday night, Johnston’s Vikings, for the third time this year, fell to the Panthers, 62-55, in the South Sub-Section 3AA championship game at Southwest Minnesota State University.

“They came after us,” Johnston said. “Their intensity picked up — we’ve seen that too many times from TMB this year. Same thing happened the other night against Martin County West. We knew at some point in time that that intensity was going to pick up.”

The win put the Panthers in the Section 3AA title game, where they will face New London-Spicer, a 62-50 winner over Morris/Chokio-Alberta in Thursday night’s second game.

The Panthers and Wildcats will tip off at 5 p.m. Friday at SMSU.

The Panthers’ two wins against Minneota this year have come by two and four points, and it was clear from early on in Thursday’s game that this one would be close as well.

The Vikings quickly erased a three-point TMB halftime lead and built their own advantage to five on an inside basket by Lydia Sussner, who totaled 38 points in the two previous games against TMB.

“We knew she’s their best player — that’s who they rely on for a lot of offense,” Kirk said of Sussner, who scored 15 Thursday. “We played inside-out, we pinched in and made them shoot the threes, then once they start hitting them we would adjust, but they never really got into a rhythm.”

TMB coach Derek Ashbaugh said the Panthers needed to play with more energy — not just in defending Sussner, but on both ends of the floor.

After Sussner’s basket, the Panthers took charge, at least momentarily, with an 11-0 run fueled by, you guessed it: their defense. TMB (26-3) seemingly sped up the game with their defense and the result was numerous forced shots by the Vikings.

“We decided to mix up our defense, give them different looks, fluster them a little bit,” Syd Lanoue said. “We wanted to be the aggressors instead of the other way around.”

But the Vikings weren’t going anywhere.

A three-pointer by Charlie Josephson got Minneota going, and the Vikings tied the game at 47 on a Josephson free throw with 3:42 left. TMB stayed very aggressive on the offensive end, however, and drew foul after foul. In just a 1:03 stretch, the Panthers connected on seven free throws to open up a 54-49 lead with just over 2 minutes left.

On the other end of the floor, the Panthers threw multiple defenses at Minneota, and even though Thursday wasn’t the first time the Vikings had seen it, they couldn’t respond well enough to handle it.

“We ran into about a four-minute spell there where they took us completely out of our game,” Johnston said. “That was enough to get them the win. We never got into a rhythm, and that’s a credit to them. We’ve had a difficulty recognizing different defenses. It was so loud, and I’m screaming at them, trying to get them re-set up, they can’t hear me and they didn’t recognize themselves.”

The Panthers’ lead reached eight before a three-pointer by Amber Engles made it 57-52, but TMB closed the game out with four more free throws. For the game, the Panthers made 19 from the charity stripe.

“We just had to keep our composure throughout the whole game,” Kirk said. “We knew they were going to be tough. We just had to play our game, keep doing what we’ve been doing all year. We just had to focus on us, and not focus on how well they may be doing. Just focus on what we needed to do well.”

Lanoue said the Panthers’ ability to force tempo in the second half was the difference between the Panthers moving on and watching their season come to an end.

“We needed to play our tempo, keep the pressure on them,” she said. “We like running the floor, too, so when we can get things going quicker and get it at our pace, we tend to do a lot better.”

“It was tough,” said Dolan, who started for the first time since spraining her ankle in the Panthers’ regular-season finalé against Springfield on Feb. 21. “We knew that we were going to have to come out strong and ready to go. We had to be focused the whole entire time.”

The Panthers survived an ugly stretch in the first half when they committed five turnovers in about two minutes. Fortunately for them, Minneota struggled to make baskets during that stretch and the Panthers rebounded well enough to prevent the Vikings from going on a run.

For the game, TMB outrebounded Minneota, 37-20.