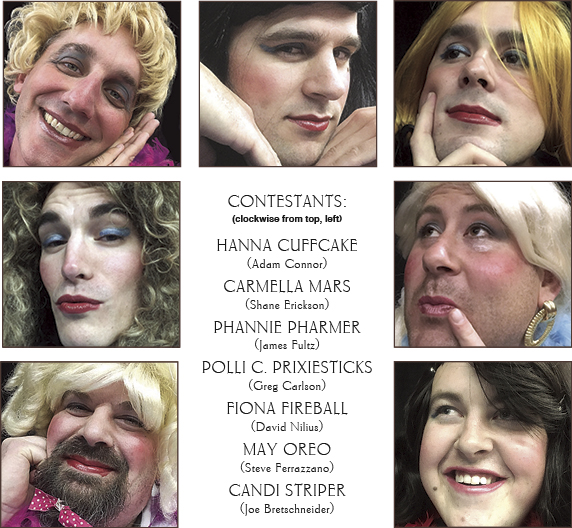 High heels and hairy hands:
Who will walk away with this year’s coveted crown?

This is going to be one sweet Miss Tootsie Pageant.
Seven gentlem … err, lovely ladies, will vie for the title of Tracy’s Miss Tootsie this year, including the city’s top government official: Mayor Steve Ferrazzano, otherwise known as May Oreo. He is joined by James Fultz (Phanni Pharmer), Greg Carlson (Polli C. Prixiesticks), David Nilius (Fiona Firebawl), Joe Bretschneider (Candi Striper), Shane Erickson (Carmella Mars) and Adam Connor (Hannah Cuffcake).
The theme for this year’s contest is Sweet-Tarts.
“It’s all about candy,” said Ade Miller, one of the event’s directors. “We’re really thankful for the men who are in it.”
What can fans expect on March 11?
“Your gut will hurt from laughing,” said Jesse James, another director. “And you may end up with a permanent smile on your face.”
As if anyone needed more reasons to go besides seeing grown men parade around in pantyhose and high heels, this year’s event will feature “Project Run-away,” that will put contestants in “original gowns,” Miller and James said.
Those special gowns were all made by community members.
There will also be a guest appearance by Willy Wonka himself.
The event, which was started by the Tracy Women of Today in the mid-1980s back in the Jim Miller and Bill Richards days, is now being put on by the Fine Arts Council of Tracy (FACT) and Tracy Community Education. This is the fourth time FACT has put the show on.
Tickets are $8 and are available at the door. The fun starts at 7 p.m. on Saturday at the Tracy Area High School. Doors open at 6 p.m. The Tracy Lions will serve walking tacos (with a brownie and pop/water) as a fundraiser from 5:30-7 p.m. in the high school cafeteria. Cost is $5 per person with proceeds going to Special Olympics.
After the show, Miss Tootsie and her court will head over to The Caboose, where videos of past Miss Tootsie pageants will be shown on the big screen. Ten percent of all sales will go to FACT.