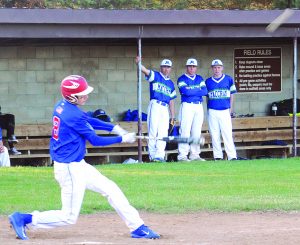 A two-win season a year ago didn’t do much for the Tracy-Milroy-Balaton baseball team’s scrapbook, but the Panthers could fill at least a couple pages of it after Friday’s game against MACCRAY.

Griffin Radke’s three-run triple in the sixth inning brought the Panthers back from a 5-2 deficit, and Luc Gervais’ deep fly ball base hit in the seventh gave TMB an 8-7 walk-off victory that evened its record at 1-1.

“We met with all the guys this week and told them that someone needs to step up and be that RBI guy in the three or four slot,” Tauer said. “Griffin came through with a big hit for us to get us back in the game. Gave us new life.”

Most of Friday’s game was a mirror image of the Panthers’ 5-2 loss in the season opener. While MACCRAY was able to put up a crooked number in the fourth with three runs, TMB struggled to string together anything substantial at the plate.

“We were looking at a lot of pitches again,” TMB coach Bill Tauer said. “We were a little too tentative. We just need to build confidence in ourselves at the plate. When you’re up there, you gotta be in charge and not let the pitcher be in charge of you. Those are some things we’ll gain with experience.”

Thanks to plate discipline, the Panthers were able to experience something Friday they didn’t get to much a year ago: the big inning. Two walks and a perfect bunt single by Moses Dolan loaded the bases with one out in the bottom of the sixth. After Konnor Zick popped out, Radke stepped to the plate and worked the count full before lining a double to the left-centerfield gap to score Athony Axford, Jake Tauer and Dolan and knot the game at 5.

“It was a straight fastball,” Radke said of the pitch he roped into the outfield. “I was a little bit nervous. I haven’t had a good game yet, but I just saw a good fastball coming and decided to swing. Just kind of relaxed, got my hands good and it came perfectly off the bat. Next thing you know, we’re tied up.”

Unfortunately for the Panthers, their excitement was short-lived. MACCRAY recorded three of its six hits in the top of the seventh to retake the lead at 7-5. However, all that did was force the Panthers to come from behind for a second time. And that’s precisely what they did.

Down to their final out after two strikeouts, the Panthers rallied again. Tauer walked for the third time in the game and Dolan reached base after the MACCRAY catcher dropped the third strike. Zick walked, bringing up Radke in another big spot, and he, too, walked to make it 7-6. MACCRAY’s pitching woes continued as Rylan Fogelson was then hit by a pitch to tie the game at 7. That brought up the freshman Gervais, who ended the game with his deep fly to left, putting the Panthers in full celebration mode along the first base line.

“We gave back a couple runs and could’ve very easily folded being a young team,” Tauer said. “But they don’t quit; they keep working. They battled back and took advantage of some wild pitching. This is a big one for us. They had, I think, seven seniors on their squad and we have one. Everytime you get a win, it will keep building. And learning how to win — that’s awesome.”

TMB played “small ball” to scratch across its first two runs. Sawyer Otto walked to lead off the second, advanced to second base on a passed ball and then stole third. He scored on a fielder’s choice grounder off the bat of Cooper Olson. In the fifth, Dolan led off with a bloop single and made his way to third before scoring on another bloop singe by Fogelson, who reached base four times.

Gervais earned the win for the Panthers, allowing five runs and six hits and striking out four in 4 2/3 innings.

“As a freshman, for his first outing, he gets a win — what more can you ask for?” Tauer said of Gervais. “And he got the walk-off hit.”

Radke started for TMB and struck out the side in the first. He picked up another strike out in the second, but his lack on control led to MACCRAYS’s first run, in the third inning and eventually earned him a spot behind the plate, as he was relieved by Gervais.

Tauer said overall he was pleased with how both of his pitchers threw.

“Griff over the years has been able to throw it well, but when he gets in trouble is when he struggles to throw strikes,” he said. “The first week of the season, he missed three or four days because of an illness, so he really hasn’t thrown a lot for us. To come out and do as well as he did today, I was very pleased with that.

“Throwing strikes is the name of the game,” Tauer added. “Our defense is always going to be pretty good — you don’t have to strike ‘em out, just get ‘em out. Right now, these guys are young and they don’t have a lot of pitches. Keep the ball down, hit their locations — they can be effective.”

Radke said since he hadn’t had much work leading up to Friday’s game, he was a little nervous on the mound.

“I came out and struck the first guy out and got a little bit better of a feeling,” he said. “Just hoped for the best.”

Radke said Friday’s game was a sign of good things to come for this year’s team.

“It was a lot of fun today,” he said. “We got a good group of players this year. VFW went about the same way — we were young, playing against older teams. Last year, we were pretty young, too, but I think this year we’ll be pretty good. Hope to just keep playing well.”