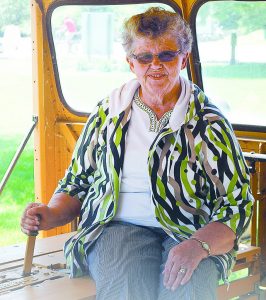 Long known as the driving force behind Currie’s world-famous End-O-Line Railroad Park and Museum, Louise Gervais was Currie. Her passion for history and the small town that was home to her diamond-in-the-rough museum fueled her drive to make it the best it could be for decades.

Gervais, the founding director and ultimate tour-giver at End-O-Line, died Friday morning, a day after suffering a stroke. She was 83.

While Gervais’ physical influence at End-O-Line has come to an end, her memory and spirit will surely live on.

Janet Timmerman, the museum’s current coordinator, calls Gervais the museum’s “institutional memory. We went to her whenever we had a question. She always had an answer about where an artifact came from and when a project had been completed. It was all in her memory. We have lost her as a valuable resource.”

Joshua Jordan, who started at End-O-Line in 2014 and is the museum’s site coordinator, said he works to preserve what Gervais started.

“Louise was extremely passionate about the history of the Currie, and its railroad history, specifically,” said Jordan. “Louise had the tenacity to put that interest to work in building End-O-Line.”

End-O-Line Park and Museum started as a Currie Poco-o-Poco 4-H Community Pride Project in 1972, of which Louise was the adult leader, according to a news release from the museum. “Murray County took over the management of the park in 1975 and was assisted throughout the years by many in the Currie community who followed Louise’s ‘can do’ attitude and made the park into one of the best-known tourist attractions in the region.”

Heath Radke worked summers at the museum from 1995-97 before his college days. He said Gervais was relentless when it came to securing funding for the museum.

“I’m sure she gave the county commissioners quite a few gray hairs,” he said. “She had to battle those commissioners quite often to get projects done that she knew were very important. To get that money for a tourist attraction sometimes was harder than it should’ve been.”

Jordan said pretty much anytime he had a question about something at the museum, he could rely on Gervais to have an answer. She was hands-on all the time, he said.

“She was in charge of everything here, more or less,” he said. “Whether it be landscaping, tours, collections, archives, exhibits or building maintenance, the buck stopped with Louise.”

Timmerman said Gervais didn’t believe that something was only of historical value if it sat in its original spot and that she saved several buildings from destruction because she was willing to make a place for them at the park. The Currie depot, section foreman house from Comfrey, Neil Currie’s original general store, District One schoolhouse, Currie First Presbyterian church all found a home at the park, Timmermann said, and each structure was carefully restored under her care.

Radke said he got to know Gervais on a personal level, but was most impressed with her professional side when it came to the museum — her attention to detail and hunger for perfection were traits that set her apart.

“She had a passion for preserving things and presenting them in just a pristine manner,” he said. “We always had to clean the displays, make sure the floor was swept, spray the tracks. She was very, very meticulous. It was important we presented ourselves and the history of that place as best we could.”

People from all over the world have visited End-O-Line, and it has been featured in regional and national publications and other media. Although she has been retired for a number of years, Gervais stayed involved with the museum with her work on its advisory board and as an advocate for the park.

“Up until her retirement she managed all of the projects with the help of assistants like David Hanson and a myriad of summer staff members,” said Timmerman. “Her legacy is all of the buildings and artifacts that those buildings now hold.”

Timmerman said Murray County has owned and managed the park since 1976. As Murray County museums coordinator, she will continue to oversee the work that is done at End-O-Line. For the last three years, the park and museum has been run by Jordan, Curator, Dr. Anita Talsma Gaul, Timmerman herself and a seasonal staff of museum assistants. They will continue to manage and preserve the museum’s legacy.

Romane Dold, a lifelong Currie resident, graduated high school a few years after Gervais and served on various boards together. He said the park and museum wouldn’t be what it is today without her.

“She and Dorothy Ruppert were pretty close with their work at the museum,” he said. “She was just a wonderful woman. Very headstrong. She had a purpose and always knew what she wanted to get done. It was 99% of the time either for the betterment of Currie, the railroad park or the church or some organization. It was really never about her.”

A news release Friday said the Murray County Board of Commissioners and staff at End-O-Line Railroad Park and Museum were “saddened to learn of the passing of founding director, Louise Gervais.”

For more on Louise Gervais, see this week’s Headlight-Herald.