This year’s TAHS graduating class will be about half  the size as 1977’s. Steadily-declining enrollment is one of many ways schooling in rural areas has changed. 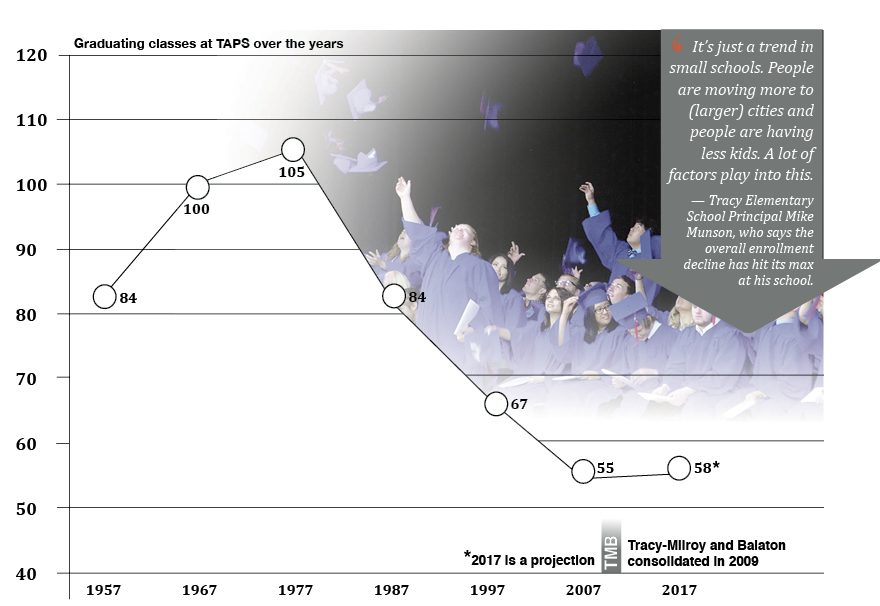 Look at it this way: Schools are saving money printing diplomas.
That’s because class sizes are getting smaller in rural schools. There’s no escaping it, and there’s no defining why it’s happening.
The fact of the matter is, class sizes in rural schools are shrinking in numbers, and it’s happening all over.
“I’ve heard it at every stop I’ve been at,” says Tracy Elementary School Elementary Principal Mike Munson. “When I was in Canby, they had a 100 people graduating back in the day, then when I came there, they were graduating 75, 80. Now I think it’s in the 50s. Fulda, where my wife’s at, is the same way. Every school is like that.”
For the most part, the elementary school will send consistent numbers to the high school over the next six years. If current numbers hold true, this year’s sixth-grade class of 62 TES students will be the largest in the next half decade headed to the high school. The enrollment trend dips next year to 48, then rebounds to 55 before plummeting to 37 (this year’s third-grade class). This year’s kindergarten class is at 50, which is still significantly lower than this year’s sixth-grade group.
“It’s really nothing you can control,” said Munson. “It’s just a trend in all small schools. People are moving more to (larger) cities and people are having less kids. A lot of factors play into this.”
Tracy Area High School consolidated with Balaton in 2009, and that year, total the Adjusted Average Daily Membership (ADM) in K-12 was 801.
It hasn’t been that high since.