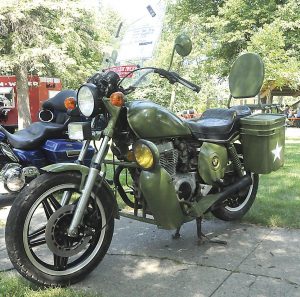 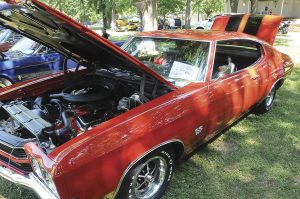 The venue, the music, the perfect combination of shade and sun, and the smooth and familiar voice of Mylan Ray made for an ideal setting for the 11th annual Tracy Car & Motorcycle Show on Saturday.
The event, which was held in downtown Tracy a year ago, was moved to Central Park this year, and it was a good thing, too. With temps flirting with 90, many attendees appreciated the shade almost as much as the vehicles on display.
“It was a very nice place to have it,” said Susan Mumm, one of the organizers of the annual event.
“If it was downtown, it would’ve been really, really hot,” said Susan’s husband, Leon. “I think everything went very well. It’s a good deal for Tracy; it brings people to town.”
Leon said the show was a good one, even with the heat.
“The people we’ve talked to who have been to the show before say we did a real nice job with this one,” he said. “It’s not really too bad here in the shade.”
Leon said he’s been wanting to get the show to the park for some time now.
“It’s nice with the shade,” he said. “And there’s a lot of room. You put them all in the street in that one block downtown, it fills it up pretty good, you know. It’s cooler, we got more room — it’s worked out really good.”