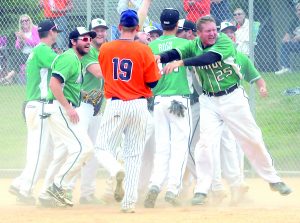 Blaine Schnaible picked a pretty good time to hit his first home run of the summer.

Schnaible’s two-out, no-doubt home run in the top of the 12th inning lifted the Milroy Irish to a 5-4 victory — and series sweep — of the top-seeded Hadley Buttermakers on Sunday in the Region 13C tournament and earned them a spot in the 2017 Minnesota State Amateur Baseball Tournament for the second straight year.

“Feels great to finally get that one — especially in the playoffs,” Schnaible said of his first long ball of the season. “It felt good coming off the bat. I knew it had a decent chance of getting out. Hopefully we can keep rolling and play well at state.”

The Irish, play a series against Fairmont starting Wednesday at Fairmont to determine seedings at the state tournament, but early on against Hadley, things didn’t look all that promising for the them.

Hadley opened up a 4-0 lead after three innings, and Milroy squandered a chance to cut into the lead, leaving the bases loaded in the top of the fourth. In the fifth, the Irish hit three line drives, but all went for outs in a six-pitch inning.

“We just had to keep our composure,” Schnaible said. “We were hitting them (hard) at them early and they were catching them. We just stayed within ourselves and kept hitting the ball. They eventually dropped and that’s how we won the game.”

The Irish broke through in the top of the seventh with two runs. Schnaible led off the inning with a double and scored on Isaac Dolan’s two-bagger. A bloop single by Anthony Dolan moved pinch runnner Moses Dolan to third, and Parker Lanoue’s sacrifice fly scored Dolan to cut Hadley’s lead to 4-2.

Kenny Morris then pitched a 1-2-3 bottom of the seventh, before the Irish struck again.

Tyler Patterson struck out to open the eighth, but reached base when the third strike got by the catcher. After Brady Lanoue flew out to the fence, Schnaible, who collected five hits and knocked in a pair of runs, singled and took second on an error. Patterson scored on the play to make it 4-3. Schnaible then scored when Isaac Dolan laced a two-out RBI double just inside the first base line — it was one of two doubles for Dolan.

“We weren’t getting hits early, but we’re a late team — we come back late (in the game),” Irish manager Bob Dolan said. “When Mason and Isaac doubled and we got that first run, I thought, ’Now we’re going, now we’re going.’”

That would be all the scoring done by either team until Schnaible stepped to the plate and blasted a two-strike pitch over the left field fence.

“I was looking fastball and he threw a change-up — I was lucky enough to get a good piece of it, and luckily it went over the fence for us,” Schnaible said.

“I thought with two strikes on him: ‘Why are they throwing him a good pitch?’” Bob Dolan said. “It was a change-up, I think, and he just smashed it.”

“We just didn’t give up — that’s been our thing all year, never give up,” Brady Lanoue said.

Although Schnaible’s blast was the difference-maker Saturday, pitching is what carried the Irish to the upset sweep. In Game 1 of the series, Cody Mather had 10 strikeouts and gave up three hits in a 1-0 complete-game win. It was Mather’s first complete game and proved to be the difference. On Saturday, the Buttermakers were held without a run over the final nine innings.

“Pitching’s kind of what’s brought us this far,” said Lanoue. “Holding Haldey to zero runs is something that a lot of teams shoot for but few do. For us to come to their place and keep them to four runs, that’s all we can ask for. Our bats had to do the rest.”

Schnaible did his part from the mound as well Saturday. He threw four innings of relief, giving up no walks and striking out four.

“I just wanted to come in, throw strikes, give us the best chance to win,” Schnaible said. “I was able to get some key outs, and luckily we won.”

“Mason was unreal today; he brought his best stuff to the ballpark, that’s for sure,” Lanoue said. “He had the ability to spot up with the curve ball and his fastball and kept them guessing all day. Those are some really tough hitters. Really good performance by Mason.”