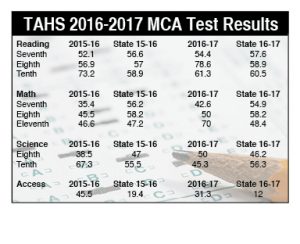 There was little change statewide in reading and math scores, the Minnesota Department of Education reported Monday, and locally, there was mostly good news to report.
At Tracy Area High School, the proficiency trend from 2016 to 2017 showed improvement in reading (61.2% to 62.8%) and math (42.8% to 52%), but a decline in science from 52.1% to 47.2%.
“The TAHS students showed their Panther Pride by their strong efforts at showcasing what they are capable of doing on the state tests,” TAHS Principal Kathy Vondracek said. “Our faculty members are 100% committed to preparing and equipping our students with the skills necessary to be successful at and above their grade level.
Overall, TAHS students showed growth in proficiency rates in six of the nine subject/grade levels of testing (reading, math, science, ACCESS).
“Our goal will always be to have growth in 100% of the subject/grade levels,” Vondracek said. “We thank the parents for their efforts at home to have the students well rested and ready to test.  This is truly a group effort for our students’ success.”
Vondracek said the focus of the upcoming school year concerning testing will be to continue to increase proficiency rates, with the overall goal to surpass the state average in all subject areas, at all grade levels.
At Tracy Elementary, the percentage of students who tested proficient in science climbed from 54.9% in 2016 to 72.9% in 2017. In math, the number dropped from 60.6% proficient in 2016 to 58.4% this past year. And in reading, the number who tested proficient jumped from 56.1% percent in 2016 to 61.4% in 2017. Fifth-graders improved their score by almost 20 percent, where the state average goes up 10 percent between those grades. TAES was above the state in both reading and science and only .3 below in math.