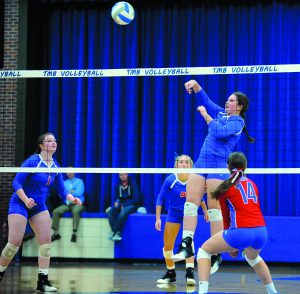 Syd Lanoue isn’t following her mother Beth’s footsteps to Southwest Minnesota State University, but she will be competing in the same conference as her mother’s alma mater.

Lanoue, arguably the strongest hitter in southwest Minnesota, recently declared her intention to continue her volleyball career at the University of Minnesota-Duluth.

“UMD has a great volleyball program and a great coaching staff, Lanoue said. “I really enjoyed the campus and the actual town of Duluth as well. I definitely felt like I could see myself spending the next four years of my life there.”

Lanoue said she’s thinking about going into the medical field and will likely major in biology.

Beth (Elliot) Lanoue was a first-team NAIA All-American at then Southwest State University in 1990, but Syd said she doesn’t feel pressure to duplicate what her mother did.

“My mom being an All-American at SMSU (SSU) is definitely something I look up to,” she said. “I see it more as encouragement than pressure. She and my dad have both encouraged and supported me to work hard and go after my own dreams.”

Lanoue said she wanted to stay in the NSIC and is excite for the opportunity to play with a perennially strong UMD team. The Bulldogs, who are ranked seventh in the American Volleyball Coaches Association preseason poll, have won the NSIC eight of the last 15 years and won 33 matches in back-to-back seasons in 2013 and 2014.

“UMD volleyball has been in the top of their conference for many years and they really have a awesome program,” she said. “When looking for a college I really wanted to stay in the NSIC because I knew that it is one of the top rated Division II conferences and (is) also very competitive.”

Before heading north, however, Lanoue has work to do during her senior year as a Panther. She said she wants to polish her skills in all the sports she’s in and looks to lead the volleyball team to another Section 3A championship.

“I want to work hard and better my skills in not just volleyball but basketball and softball, too, and help the team in any way I can,” she said. “I think that all my teammates would agree that we would like to make it back to the state tournament for volleyball and compete for the championship. I want to make my last season as a panther and with my teammates fun and memorable.”