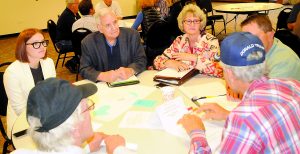 During his opening remarks at Thursday night’s 25 by 25 water quality town hall, Gov. Mark Dayton spotted a 9-year-old sitting toward the back of a crowded conference center at Southwest Minnesota State University.

“These meetings are for you,” Dayton told the young attendee. “It’s really amazing that you came.”

Dayton’s point was clear: The state needs to take control of its water quality problem now to ensure clearer and cleaner water in the future.

“We all have a stake in this,” said Dayton, who, along with agency heads and state commissioners is pushing an initiative to improve the state’s water quality by 25% by the year 2025. “How can we all get together to improve our water quality? If we don’t, it’s going to continue to get worse and cost untold millions or billions of dollars over the next decades in terms of water treatment facilities and operations. It would fall heavily on small towns and communities.”

While there are sporadic water improvement success stories in the region — Lake Maria in northern Murray County and Lake Shaokatan west of Marshall — Southwest Minnesota arguably has some of the state’s most contaminated water. Many lakes and streams in this region don’t meet water quality standards.

Dayton said his level of awareness to the plight of the state’s water quality was ramped up when he got his first look at the Minnesota Pollution Control Agency’s initial draft of southwestern Minnesota’s contaminated water supply.

“I was shocked,” he said. “I grew up in Minnesota — land of sky-blue waters … the good Lord gave us this incredible blessing of water quality and water supply and I just assumed it was guaranteed. Well, nothing is unless we preserve it.”

Dayton, who laughed at himself with a self reference to being labeled as the “Buffer Bully” after his quest to pass legislation that farmers are required to implement buffer strips along their cropland, said the 25 by 25 meetings are not meant for fingerpointing. He said the state needs to work together in solving a problem that has been built over time.

“Let’s turn this thing around,” he said.

The state’s water quality improvement goals include: reductions in water pollutants; protection of drinking water; an increase in access to water recreation and protection on agricultural lands, as well as urban areas; and an increase in public engagement on the topic.

Olson said the Chippewa River Watershed is the most monitored watershed in Minnesota. She said despite installing Best Management Practices within the watershed, there are still problems, mainly because of the water that flows into it.

Olson said turbidity, bacteria and excessive nutrients all feed into the overall water quality issue around the state. She said more than 40 new impairments have been added to the watershed.

“This tells us that the traditional BMP (Best Management Practices) that we’ve all been doing are not working,” she said. “It’s everybody’s responsibility. It’s up to every single one of you to do you part, whether you live in town or on a farm. There’s things all of us can do. We all need to change our behavior or it’s not going to happen. I’ve seen this for too long.”

Olson said soil health is one of the state’s biggest players in terms of turning water quality around. She said cover crops will help improve the overall soil health. Healthy soil, she said, stays on the landscape.

“We won’t get all the sediment runoff if we have healthy soil,” she said.

Lincoln County farmer Jim Nichols was blunt in his assessment of the state’s water supply and what can be done about it. He lamented the closure of the Lincoln Pipestone Rural Water System that he said served over 4,000 farms in 10 counties.

“To close that well because of high nitrate levels … water has become such a precious thing,” he said.

Nichols spoke, not as a politician — he is a former state senator, ag commissioner and county commissioner — but as a farmer. He said despite not farming the best land, he had the highest yield of corn in the state last year. He pleaded with farmers to change the way they farm their land — for their sake, and for water quality improvement.

“The key is to put your fertilizer on at the right time,” he said. “It’s not hard to do. Put your fertilizer on in the spring, don’t do it in the fall. There’s no way to sugar-coat this; it’s the dumbest damn thing you can do, because you’re going to lose half your nitrogen. If you put it on 200 acres in the fall, 100 acres (of it) is going to leach away into the water, let’s be honest here. Nitrate loves water and water loves nitrate, so it bonds with the water — the water seeps away and takes the nitrate with it.”

After the speakers finished, a breakout session among the 200 guests began and centered around three basic questions: What goals could be established to improve water quality by 25% in Southwestern Minnesota; What actions are needed to get to these goals for Southwestern Minnesota; and What specific next steps are needed to move the actions forward? Each of the three sessions lasted 15 to 20 minutes. One member of each table was charged with downloading the group’s answers to a website before individuals moved on to another table to continue the discussion.

Thursday’s town hall was the third of its kind that has taken place across southern Minnesota (Rochester, Mankato) and included numerous commissioners and agency heads.

In a news conference after the event, Dayton said the format of the water quality town halls helps avoid rural vs. urban fingerpointing on the issue. He said the town hall aspect of the discussions help reduce polarization.

“We’re not having people giving speeches to the audience, where it tends to calcify their positions,” he said. “We want there to be a dialogue.”

Dayton said the goal of the meetings is to get all sides working together. Just as important, he said, was people doing their part.

“It’s towns and townships in terms of what their practices are, but it also goes to every individual,” he said. “Up until about five years ago, I never thought of turning the water faucet off when I’m brushing my teeth … we all have a responsibility to make a difference.”

Dayton said he erred to an extent with his buffer strip initiative, in that it came across “heavy-handed.” However, he said, it triggered the process of bringing it to the farmers and allowing for some local control.

He said in the end, people felt “they had some power in terms of what the outcomes were going to be. It was a learning experience.”

John Jaschke, executive director of the Board of Water and Soil Resources said the original buffer proposal was “pretty simple,” and that adjustments made to the buffer initiative made it more adaptable for the sites it will be more applicable to.

“The alternative ideas that were brought in that could supplement or work with a buffer of a different size — those are real important to make the governor’s idea fit the landscape.”