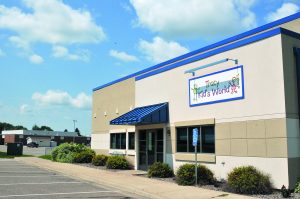 Tracy Kids’ World has a classic good news-bad news scenario as it prepares to begin its 2017-18 school year.

The good news is that Kids’ World will be serving 65 to 70 children this fall, including about 45 who are full-time.

The bad news is that Kids’ World can’t accommodate all of the children that parents want to enroll.

“We have a waiting list in every age group,” explains Greg Carlson, a Kids’ World board member.

The unmet needs are greatest for children from six weeks to 16 months, where 14 children are on the waiting list.  The Kids’ World toddler room (16 to 33 months) has a waiting list of two, with seven children on the pre-school to kindergarten room (33 months to age five) waiting list.  Two school-age children (up to age 12) are waiting for openings.

Tracy is fortunate to have Kids’ World.

“It is fantastic that we have such a nice facility here,” Carlson relates. “We as a community need to realize what a big asset Kids’ World is.”  Even with Kids’ World, Carlson adds, local parents with young children often have a difficult time finding good daycare.

Many communities larger than Tracy, he notes, don’t have a large childcare and pre-school center like Kids World.     The center, with its indoor gym, gives youngsters an excellent spot for active play during the winter months, Carlson points out.  A spacious outdoor playground is fenced in.  A sidewalk connects the Kids World to Tracy Elementary School, making access easy for enrolled school-age children.

Speaking as a parent, Carlson said that he and his wife, Kristina, have been very pleased with the learning progression that their children have experienced at Kids’ World.

The administrative challenge for Kids’ World is to meet state staff-to-child ratios, but not to become overstaffed to the point expenses increase beyond the break-even point, Carlson explains.

He expresses gratitude for the quality of the Kids’ World staff, especially lead teacher Deb Huffman, who is leaving the center to accept a teaching position with the Red Rock school district in Lamberton.  Her last day with Kids’ World is Friday.

“We owe Deb a debt of gratitude,” Carlson says.  “She has done so much for our kids.  The amount of knowledge in her head about Kids’ World is ridiculous.”

Carlson says that an announcement regarding Huffman’s successor would be made soon.

Carlson says that finding and retaining qualified people is an on-going challenge for Kids’ World.  Not only is there an emerging shortage of qualified teachers, he says, but it is difficult for Kids’ World to pay as much as some other local employers. The Kids’ World building is licensed to serve more than its existing students, he notes, if additional qualified staff could be hired.  Meeting stringent state requirements are an on-going expense.

Volunteers, who want to spend a few hours a week helping children, are welcome at Kids’ World, Carlson says.  But in compliance with state rules, all community volunteers must fill out an application and be approved.  For more information, people can call Kids’ World at 212-6724.

Carlson feels that Kids’ World has an excellent working relationship with the Tracy Public School district, which owns the building and leases space to Kids’ World.

The current high enrollments and financial stability are a sharp contrast to the financial crisis that hovered over Kids’ World six years ago.

The 11,500 square foot daycare center opened with great fanfare in August of 2008, after the Tracy Economic Development Authority worked for seven years to get the center built.   The $1.5 million facility was financed with a $1.1 million loan from the Rural Development Agency, a $100,000 federal grant, another $100,000 federal loan, and $190,000 in area contributions.

But Kids’ World ran into financial problems almost immediately, after delays in opening the center, less than projected enrollments, and an unexpected dispute over whether Kids’ World qualified for a non-profit property tax exception.

Tracy Public Schools later qualified for a $104,000 state grant to help convert part of Kids’ World into space for the Little Panthers Pre-School.  The school district has used space in the Kids’ World building for its Little Panthers pre-school program  since the fall of 2012.

“The school district came in and saved the day,” says Carlson.

Since its low point in 2011-12, Kids’ World enrollments have more than doubled.

Kids’ World is open year around from 6 a.m. to 6 p.m, Monday through Friday, except for major holidays.