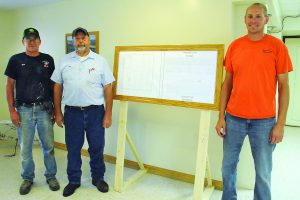 How do you turn a fire fighting crew into a construction crew? Simple: Build a new fire hall.

That’s the hope of the Currie Fire Department, which is in the process of raising funds for a new $275,000 80 foot-by-80 foot fire hall that would be built in a large lot behind the existing one.

“We’re going to all try to help out,” said Currie Fire Chief Jeff Zens. “Joe (Schreier) is going to head it up, do the building — that’s going to be huge. We’ve got plumbers on the fire department, electricians and heating people. We’re hoping that we can use all their expertise to build this building. That’s our plan. We’re obviously going to need some help with some issues, but the majority of it will be done by our own people.”

Why the need? Consider this: Since the 1980s, the fire department has operated out of a room that used to be a gymnasium — an old gymnasium, not one of those modern new, spacious ones that you can fit a small town in. The fire department currently wedges six vehicles — fire rigs and a pick-up — into the 40 foot-by-60 foot area. There is just enough room between the vehicles for one person to walk. On the north side of the room where fire fighters’ turnout gear hangs, there is about three feet of room for firemen to suit up.

And a larger building would mean fire fighters can train indoors at times.

“Say we want to do a car (for car accidents) — we can haul one in here and train on it,” Zens said. “Everything — ice rescue — it would be nice if we could train inside.”

Firefighter Mark Gervais said the fire department, well known for its Fourth of July fireworks display, is switching to electronic fireworks, and if they had the room, they could load them on a trailer and store them indoors, as opposed to doing it onsite.

The current building is keeping the fire department from evolving and meeting future needs. With current rigs aging and becoming obsolete, the department has its eyes on new equipment, specifically a tanker, but they can’t move on that at this point because their building doesn’t have the space for a newer model.

“Marshall had a fire truck for sale that we looked at and we just couldn’t fit it in there,” Zens said. “It was about four feet longer, it was taller, we couldn’t get it in our doors. All the trucks that we’ve been looking at to buy have gotten bigger. Our old trucks are from the 70s, and we just don’t have any room for new ones. I went up to Dawson. It would’ve been nice rig for our fleet.”

“We’ve found some nice trucks, but they don’t fit in here,” Gervais said.

Schreier said the doors of the new building would be two feet wider and two feet taller than the existing ones.

The fire department has been fundraising for the new hall for about four years.

“We want the public to know we’ve been working on this and that our hearts are in it,” Zens said.

Zens, who has been Currie’s fire chief for 12 years, said if fundraising efforts go as hoped, the department would like to open the new hall late next year, but nothing is set in stone yet.

“If we can raise $150,000, we’re going to probably start the project, and hopefully by the time we get the project done we’ll have enough raised,” Zens said.

“We just had our open house and had a pretty decent turnout for that. We’ve had some nice donations — some small ones, some big ones — and we’re still looking for more donations. It’s gone pretty well so far.”

Schreier noted that if a new fire hall is built, it would open up the existing station for other uses. The hall is connected to the municipal building, which includes a kitchen.

“It would open up the new gym for community functions, like the 4th of July they like to have a pancake breakfast,” he said. “All of a sudden if it’s raining, they have a building to go to. It would make a nice community center. It has a kitchen and bathrooms already.”

Zens said the building is currently used for some city functions, but all the trucks have to be moved outside for anything to take place inside.

The new station would feature a Donation Wall that would highlight donors to the project. Fundraising levels range from $100 (bronze) all the way up to $10,000 (honorary). Donations can be left with sponsoring businesses, a member of the fire department or mailed to the City of Currie or the fire department. Anyone with questions about the hall or fundraising can call Gervais (507-829-8738) or Matt Schreier (507-227-7806).

“We’ll keep track of all the donors,” Gervais said.

“I’ve been talking to a lot of people in the community to get their feelings about it — if they thought we were over-the-top with it — and they were all 100% behind it,” Zens said. “They said, ‘We can see that you need to do something.’”

The Currie Fire Department normally has 22 members, but is currently down to 20, Zens said.