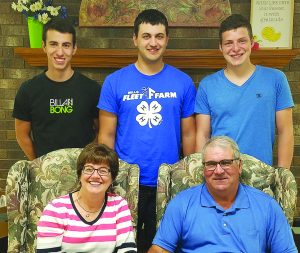 Tracy Area High School’s Class of 2015 decided to have a prom king and queen. The king has returned to his home away from home for the second time this month.

That royalty is Deme Vadda, an AFS student from Italy who spent a year in Tracy in 2015. Apparently, he likes the small town and his host family — Greg, Karen and Scott Lanoue — so much, he just can’t stay away.

“It’s kind of like having a second family,” Vadda said in near-perfect English. “I’ve kept in touch so well with everyone; I like America, I like Tracy. If I had the chance I would like to come back every year.”

Karen said the experience of hosting an AFS student was a life-changer. Not even she anticipated a teen from Italy would have so much of an impact on her and her family.

“He became our son while he was here,” she said. “Having him here years ago was an unbelievable experience. It changed our lives. I didn’t know what to expect, because I’ve heard both good and bad — I was hoping we would end up with a good experience. It was a lot better than I even hoped it would be.”

Looking back, Vadda said he enjoyed attending high school in Tracy and had a special fondness for farm living.

“There’s always something to do, animals to take care of,” said Vadda, who is about to enter his third year of vet school in Turin, Italy. “I love livestock. Most people that go to vet school these days just like small animals, but I like to take care of livestock, too. I like the farm.”

Vadda, now 20, returned to the area for two months last year but is only able to stay for a month this time around. He leaves again Aug. 30 for a four-day stay in New York before returning home to go back to school.

One of six foreign exchange students to attend TAHS in 2015, Vadda played soccer, track and field, and intramural basketball in school at TAHS. He also gave American football a shot, but that didn’t last too long.

“I went there for the first practice and I was like, ‘Football is cool, I can learn a new sport,’ and we were just running,” he said. “Just running and running. I think, like, six kids puked the first day. I was like, ‘Oh geez, I don’t know if I want to do this.’ So I switched to soccer — I played soccer back in Italy — and that was fun.”

Vadda brought his best friend, Loris Sereno, from Italy so he could share his American experience with him and so he could meet his American family that he won’t see again until … well, probably next year.