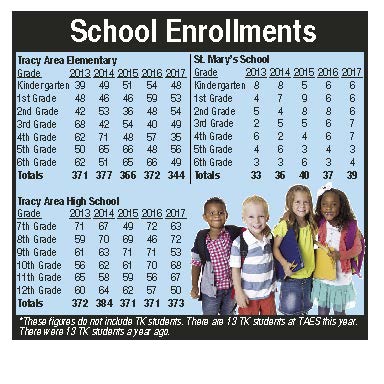 The current downward trend in enrollment at Tracy Area Public Schools is not breaking news to school administration. It’s something District 2904 was prepared to deal with, and Supt. Chad Anderson is hopeful the trend reverses itself in the near future.
“As you look at past enrollments, things always vary,” Anderson said.
Anderson said current enrollment figures will stay on the lower side — compared to past numbers — for the near future. This year’s senior class is 50, and this year’s sixth-grade class is 49. Next year’s senior class will likely be in the upper 60s (it currently stands at 67), and that year’s sixth-grade class will climb into the upper 50s.
“After this year’s junior class leaves, we could see a drop,” Anderson said. “Depending on what happens when kids are coming in and out — that always changes — I think that year is when we’ll see a big dip. Hopefully things will start to level off after that.”
Anderson said enrollment figures are something that the district is always mindful of and something they need to consider as they evaluate programming, curriculum and budgets.
Not counting transitional kindergarten students, this year’s enrollment stands at 717, up 12 from preliminary estimates in July, but down from 730 at this time a year ago. Enrollment in 2015 was 743.
Anderson said each student equates to about $6,400 in state aid, and when other categorical aid the school receives is factored in, the per student goal rises to about $10,000 per student.
“So, the less students you have, the less funding that comes in across the board,” he said. “That’s the main way it affects us as far as revenues.”
The school district draws students from a number of towns, but for some families, Anderson said choosing a school is a matter of preference, and that might mean some migrate to other districts such as Marshall, which continues to see its enrollment climb.
“The biggest things I’ve seen in where kids go to school is where their parents went to school, where their parents work and where their friends go.”
Of TAPS total enrollment, approximate 440 have a Tracy address, with 111 having a Balaton address. Walnut Grove is next with 64, followed by Garvin at 46.

•At St Mary’s, enrollment is up by 11 over last year, partly a result of three additional families with a pre-K student(s). who came over after the closing of Wee World. The pre-K total doubled from last year and sits at 18 students.
The third-, fourth- and sixth-grade classes are all up one student compared to last year.
St. Mary’s is still working to find a new principal after Laurie Nord resigned from her position after the 2016-17 school year.