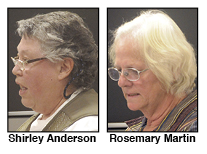 A pair of Tracy residents continued pressing their concerns about council members and their alleged practices at Monday night’s council meeting.
First, without naming names, Shirley Anderson addressed the council about her concern about potential violations of ordinances within the city.
“It is important (ordinances) are followed and have valid action,” she said. “It’s especially concerning to have violations in conjunction with conflicts of interest of certain council members. You all, as council members, and the mayor, take an oath of office to follow the city charter, city ordinances and city rules.”
charter, city ordinances and city rules.”
Anderson said the council recently violated local laws by voting to just have seven members on the charter commission. She said on May 22, City Attorney Matthew Gross informed the council of a violation of the city code. She said according to Section 1.09 of the city charter, it is mandatory to have a non-member charter commission.
Another violation Anderson noted involved the dispute for issuing permission to have and house three dogs.
“This was against city code, Chapter 8.30, Sub-division 4,” she said. “The keeping of four or more dogs was in violation of the city code, without a special permit where neighbors are contacted about this special permit request, and it was not done.”
Anderson also brought up a violation of public nuisances. She said there are still “all kinds of violations out there.” She encouraged the council to read, or re-read the city charter and city codes and follow them as required and uphold the oath of office they took.
Mayor Steve Ferrazzano addressed the public nuisance issue later in the meeting.
“We have a public nuisance committee, don’t we? My view is they need to meet again,” he said. “We have people that are investing in buildings downtown … but we still see the same thing —year, after year, after year, after year.”
Ferrazzano said the committee needs to facilitate progress to clean up the city and appointed councilman Bill Chukuske, who sits on the committee, to get the meetings going again.
Finally, Anderson filed a formal complaint concerning closed meetings the council holds.
“I don’t know when the public is supposed to find out what you did at these closed meetings, but I really would like to know, ‘cause I don’t like it,” she said.
Another outspoken community member, Rosemary Martin, directed the council to city code Chapter 2.50 sub-division 5 first statement, Section E and E 1, Sub-divisions 8 and 9, in regards to potential conflicts of interest among council members.