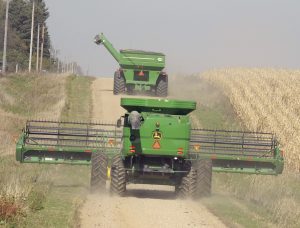 “We’ve got a lot of good neighbors,” Sarah Pamp Brakke summed up Friday.
The 2001 Tracy Area High School graduate was behind the wheel of a pickup on a township road. In a nearby field, a combine whirred through a soybean field. A second combine, with an accompanying grain cart, had just rumbled by in the opposite direction. Each of the behemoth machines was part of a neighborly effort to harvest soybeans for her parents, Doug and Melanie Pamp.
Doug Pamp has been hospitalized at Avera-McKennen Hospital in Sioux Falls, after being laid low by meningitis.
“We’re taking it one day at a time,” Melanie said Tuesday morning from Sioux Falls. Tuesday marked the 13th day of her husband’s hospitalization. “It’s been a roller-coaster.”
Neighbors joined forces Friday to harvest 260 acres of the Pamps’ soybeans, starting at 10 a.m. and finishing up by 3 p.m.
“I can’t say enough to thank people,” Melanie Pamp said. “It was really amazing. To think that all those people came and gave of their time and used their own machinery to help us out.”