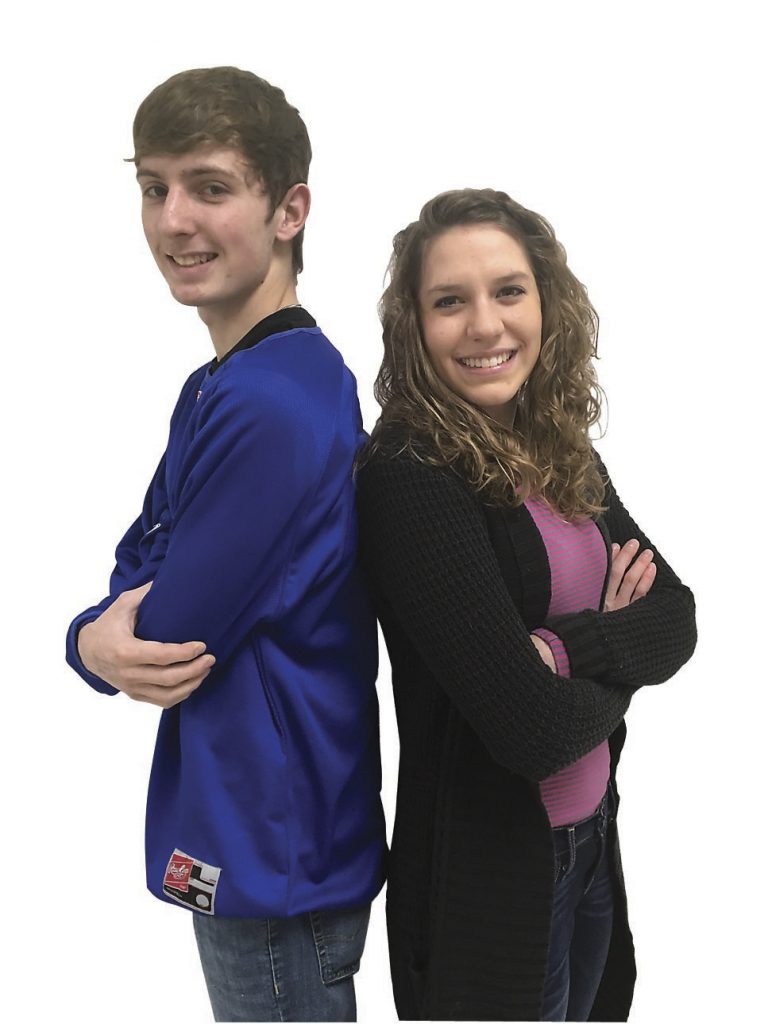 Sarita Hook and Moses Dolan have been chosen to represent Tracy Area High School as this year’s Region 3A “Triple A” nominees.

Dolan and Hook were selected by the Tracy Area Schools Triple A Selection Committee. They will now compete against other students in Sub-Region 11.

“Triple A” candidates must be involved in at least one sport, one fine arts activity and meet academic requirements. All nominees are required to complete essays that relate to each of the three categories.

The teachers who nominate them do so with a letter.

Here is a look at this year’s TAHS nominees:

Hook has appeared consistently on the TAHS A Honor Roll and was recognized as a Spotlight on Scholarship recipient. She was also honored with an Outstanding Student Achiever award her sophomore year, when she received an academic letter. She has also received two Academic Stars and was honored with the Minnesota State High School League State ExCEL Award as a junior.

“Through the years, I have also been blessed with several opportunities to develop my leadership skills,” Hook wrote. In 10th grade, I was solely selected to attend the three-day MILE Seminar as a student representative and was chosen to attend the Everyday Leader Seminar her junior year. She was also a Girls Stater last summer.

Hook participates in band, choir, one-act play and speech. She has been involved in TAHS’s fall theater productions for the last three years and played Dorothy in the school’s recent production of “The Wizard of Oz.” Hook also is a piano accompanist for the Lake Sarah Baptist Church praise team.

Despite her love of dance and participation in pointe class during her sophomore and junior years, Hook wrote that she is “forever grateful” in her decision to move from studio dance to speech.

For sports, Hook is a four-year varsity member of the TMB cross country, and track and field teams, was named All-Conference in track and field four times and has made two state tournament appearances.

Hook wrote that without the variety offered by taking part in sports and the fine arts, she never would have developed the relationships she enjoys today. She said her roles in each have taught her that every activity is “an opportunity to develop others and their strengths as well. Several years from now, people will not remember what I did, but they will remember how I made them feel.”

Dolan, who plans to attend Ridgewater College in Willmar and major in Veterinary Technology, is involved in band and choir and earned Superior Ratings in solo contest three times. He has been a member of the Chamber Choir for four years.

“This school year, I have been selected to be the president of our senior high choir and have also learned a lot about leadership and responsibility that goes along with being president,” Dolan wrote in one of his essays.

Dolan has been a three-sport athlete (basketball, football and baseball) at the varsity level for three years (four years in football).

Dolan wrote that being involved in all his activities has helped him develop in numerous ways. He said they have taught him how to work as a team and to trust in the people he is working with.

He wrote that being a leader is a great responsibility in that others look up to him.

“You also have to be a vocal leader and have the confidence to vocally lead,” he wrote. This all ties into being a better student and a better person, because in school or when you graduate and get a job you will probably have to learn how to work together with other people.”

Dolan wrote that being a singer and musician, also requires working together.

“Being in the arts, athletics and academics all benefit greatly to developing in growth in being a well-rounded person and learning lessons for the future.”