Dovray had bragging rights as the icebox of the region early Tuesday.

The National Weather Service in Sioux Falls clocked wind chills of minus 38 degrees  two miles west of Dovray at 2:11 a.m. Tuesday, thanks to northerly winds of 29 MPH.

The Tracy Airport was in the middle of the cold blast with a negative 10-degree temperature and similar winds.

The Alberta Clipper arrived late Sunday afternoon, with temperatures plunging from 21 degrees to minus 10 degrees at 7 a.m. Monday.  Northwesterly winds that sometimes gusted over 30 MPH, coupled with two inches of snow Sunday, made travel difficult.  But Tracy schools began on time Monday.  Those attending a Monday night elementary  band and choir concert braved minus 10 degree temperatures, and wind gusts of over 25 MPH.

Sunday was the only day since Thursday without sub-zero cold.  As of Tuesday, six of 16 days in January have had temperatures below zero.

A warming trend is forecast in the latter part of the week, with highs possibly in the 40s. 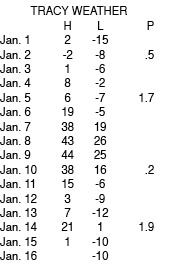