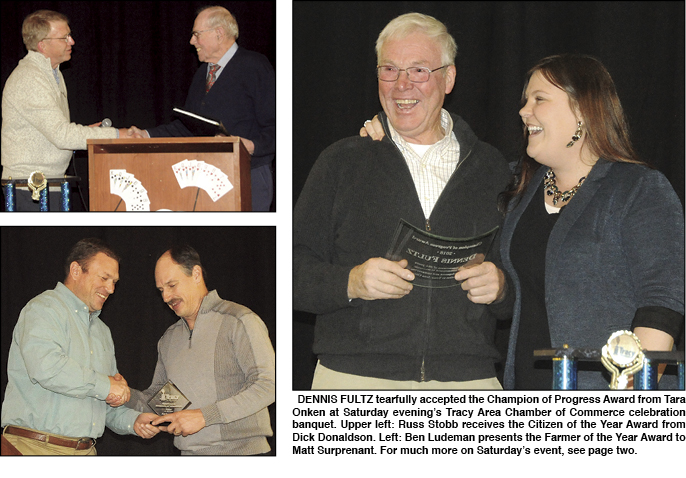 Tracy Area Chamber looks back on 2017

Tracy residents joined Tracy Area Chamber of Commerce members in celebrating the magic of teamwork Saturday night and bidding adieu to Kim Roggatz, who has directed the Chamber since 2013.

The Chamber held its 114th annual celebration banquet at The Caboose to the theme of “You Are the Magic” and once again honored a group of residents who made a difference in a variety of capacities in 2017.

In her opening speech, Roggatz thanked the Chamber members for their investment in the community, volunteers who help out for big events, community members and businesses and their employees that sponsor and support all the events throughout the year.

“You are all the magic that not only makes the Tracy Area Chamber possible, but what makes the Tracy community a great place to live,” Roggatz said. “The year 2017 was a wonderful year for the Chamber. We had many wonderful events.”

“We ran the parade backwards — and it worked,” she said. “So change is OK.”

Roggatz also thanked the City of Tracy, Tracy Police Department, the Tracy Fire Department and the Tracy Amublance — “I never needed them for anything, but I appreciate they are there and offered their support.”

Roggatz then turned the mic over to incoming Chamber President Greg Carlson, who stepped in at the last minute for an ill Justin Stuefen. Carlson officially opened the annual meeting and recommended the reading of the financial statements.

“With the 90th Box Car Days, we did try and do a few things to bring more people into town” Carlson said. “We did have an increase in expenses, but we also did bring in about as much income.”

Carpenter thanked Roggatz and Onken for helping him make the transition to his new seat over the last month and acknowledged that the city has a “long way to go” to reach their goals and make the city the best it can be.

“I want to also thank everybody in the room for the warm welcome I’ve received over the past 60 days, from everybody who’s come into the office, or everybody on the street, I appreciate that to no end. I want you all to trust me when I say I will do everything I can to help this city go forward.”

Onken said Roggatz has “held everyone together. You hold us all together, you are amazing. Thank you so much.”