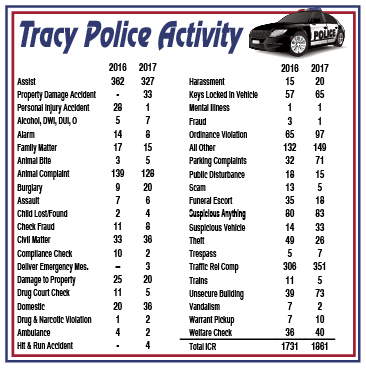 The Tracy Police Dept. wrote 68 citations during 2017, for a total of 84 offenses, according to a report compiled by Police Chief Jason Lichty.

“The citations ranged from bad checks to DWI and misdemeanor domestic assaults,” the chief wrote, in a Jan. 22 report to the Tracy City Council.

Lichty reported that 25 of the citations were for driving-related offenses, such as speeding, and 23 were driver license related, such as driving with a revoked or suspended license.

But the community was far from crime-free.

Police tracked a predatory offender once, and were involved with 33  “suspicious vehicle” reports.

“Animal complaints”—many of which involved barking dogs—was again one of the department’s most active categories, with 128 calls.  There were five animal bite complaints.

In comparison, there were 15 “public disturbance” and four “loud party, noise” calls. Vandalism was relatively quiet with just two calls.

Ordinance violation was a busy category, with 148 cases.Parking complaints were logged 71 times.