Snowfall forecasts have often been more dire this winter than what actually happens.

Sunday night weather forecasts called for less than an inch of snow Monday. But by daybreak, the snow outlook had been upgraded to three to six inches.

The Tracy area got all of that and more.  An all-day snow Monday that continued Tuesday brought at least nine inches of wet, sloppy snow to Tracy.  The initial globs of wet snowflakes created slush on the ground, which then formed into ice, making snow removal difficult. 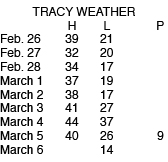 Tracy Public Schools announced that classes would be two hours late Monday, before canceling school.   The Minnesota Dept. of Transportation advised no travel on many area highways Monday and into Tuesday. Tracy schools, like most in the area, remained closed Tuesday, with a blizzard warning in effect until Tuesday noon.

With travel conditions still difficult Tuesday night, a Section 3AA girls’ basketball play-off game involving Tracy-Milroy-Balaton and Martin County West, was moved from Marshall to the more central location of Windom, and the start-time moved ahead an hour.

The past two week’s have been the snowiest of the winter.  Since Feb. 19, 20” of snow has fallen in Tracy.

Because of this week’s inclement weather, Tracy Public School are rescheduled several events. Parent/Teacher Conferences at both schools will now take place Thursday. The times will remain the same, and already-scheduled individual time slots are unchanged. Also, the Tracy Area Girls softball registration/information night will take place at 6 p.m. on Thursday in the high school gymnasium. At least one parent must attend this meeting.