Another week, another spring blizzard — this time, 25 inches of snow was left behind, making a long winter even longer 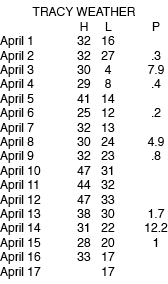 The Weather Channel dubbed the mammoth weekend storm that swept across the Midwest “Xanto.”

But for many in the region, the avalanche of heavy, wet snow that fell Friday through Sunday was simply a royal pain.

“I can’t remember a time when we’ve gotten this much snow at a single pop,” said Bob Karbo, as he neared the end of his area Star-Tribune delivery route at Sunday noon, hours behind schedule.

How much snow fell?

The City of Tracy’s weather station  at the water plant reported 25” of total snowfall from the storm.

At the Tracy Airport, 14.9” of snow was recorded Friday through Sunday. Lake Shetek weather observer Kevin Haney reported the storm’s total at 18”.

Large snowfalls were logged across the region. Canby snowfall was in the neighborhood of 23”.  Sioux Falls, S.D. reported 15” while a similar snow total resulted in the closure of the Minneapolis-St. Paul Airport Saturday and cancellation of hundreds of flights.  Highways were closed throughout the region, including Interstates 90 and 29.

The weekend snow brought the November to April snow total at the Tracy water plant to 86”. Twenty-four inches were recorded in March and 37” in April.

The area was bracing for another snow forecast for Wednesday (April 18).

Virtually all area events for Saturday and Sunday were nixed,

including the Prairie Women’s Expo, which was postponed until April 28, and the Tracy Dance Studio’s Sunday recital, which was moved to Monday night. (See related story). Local churches called off Sunday morning service.  Tracy Food Pride and Casey’s General Store were among a handful of businesses that remained open Saturday.  Food Pride owner Bruce Schelhaas stayed the entire weekend giving employees rides to and from work.

No mail could be delivered from the Tracy Post Office Saturday, because mail trucks didn’t arrive.

Jeri Schons, director of Nursing at Sanford, said some staffers were on-site for up to 60 hours, Friday night through Monday morning. Nursing, X-ray, lab, and respiratory therapy staff members were among those who stayed on, with sleeping arrangements made in extra rooms at the hospital and O’Brien Court.  Denise Clouse, Sanford’s director of community relations, cited Kendall Cooreman, for doing an exemplary job of keeping the hospital’s parking lot clear of snow.

Brian Hinrich, Prairie View administrator,, said that he spent much of the weekend shuttling employees back and forth from homes in town, with some staffers opening their homes up to out-of-town workers.  Drifts on the north side of Prairie View, he added, reached the building’s roofline.

The storm began with pebbles of hail Friday morning, and intermittent sleet and thunder.   Tracy school dismissed at 2 p.m. because of the on-coming snow. Heavy snow fell most of the day Saturday, with wind gusts over 30 MPH, as the state highway patrol advised no travel and closed numerous highways in the region.

City of Tracy crews tried to keep ahead of the snow, plowing snow from city streets from 8 a.m. Saturday to 1 a.m. Sunday,  and resuming operations from 6 a.m. to 2 p.m. Sunday.  Most streets had to be plowed twice, with some gone over three times, Daniels said. Snow clearing shifted Monday to the city airport and alleys Monday. (See related story).

Snow removal operations got underway Sunday for commercial operations, homeowners, and residents.  The depth and weight of the snow made operations challenging for most.