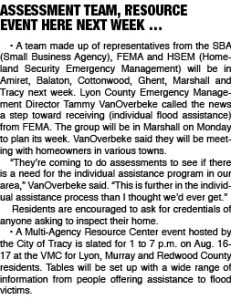 The dollar amount in flood damage for Tracy and its residents has eclipsed the $2.8 million mark.

“This is about who’s going to, per capita, show the greatest amount — us, Redwood, Wabasso, are we going to have more per capita than Murray County?” Tracy Police Chief Jason Lichty said. “It’s going to show who got hit the worst. If all of these areas are diligent in collecting data, that could mean individual assistance for the whole area, even though there are no guarantees. Everybody’s got to do their due diligence.”

Lichty said he knew from the day of the flood that the amount of damage in dollars and cents would be staggering.

As of Tuesday, 386 homes have reported some kind of damage, and nearly 90 homes are in need of mold mitigation. Roughly $314,000 in appliance losses has been reported. In all, 19 homes have suffered structural damage, and just recently the former Enderson’s building downtown was condemned because of structural damage in the basement. “Part of the foundation is starting to give way,” Tracy Fire Chief Dale Johnson III said. “It would be nice if somebody had the money to fix it, but unfortunately, it’s probably at that point right now where it’s cheaper to remove it and put up a new (building).”