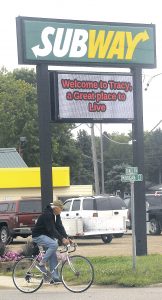 “Welcome to Tracy, a Great place to live.”

The greeting was one of four messages rotating on a new electronic billboard near the intersection of Hwy. 14 and Morgan.   When the digital sign lit up for the first time Tuesday, three years of fund-raising efforts and planning by the Tracy Lions came to fruition.

The $40,000 sign was erected on posts underneath the Tracy Subway sign Friday, and became operational Tuesday.  In addition to the current time and temperature, three messages were being rotated. .  One listed the dates for Tracy Box Car Days, another proclaimed, “Where there is a need, there’s a Lion.”

Frank Nielsen was among the Tracy Lions who helped spearhead the community sign project.

“Finally,” he said, as he looked at the functioning billboard Tuesday morning.

He said that the Lions would be developing policies regarding the community use of the digital message board.

School, community, Chamber of Commerce, and City of Tracy activities will be among the messages accepted for the board.  In addition to letters and numbers, the board is capable of showing rudimentary graphics and video.

The board is about nine-feet, six-inches wide and five-feet, five-inches high, making messages visible from a distance.

A community dinner and raffle in April has been one of the Lions’ sign fund-raisers. Major donors have included Tracy Public Schools ($5,000), which will be able to post all school events at no charge, and the Tracy Area Education Foundation ($3,000).

The digital sign will replace a wooden community events billboard that the Chamber of Commerce has maintained at the Tracy Tornado Memorial Park since the mid-1980s. Announcements on that sign need to be placed manually, letter by letter.