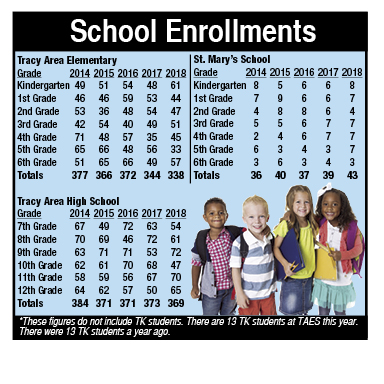 This is one elephant in the classroom that the Tracy School District might not ever get rid of.

For the second year in a row, enrollment is down at Tracy Area Public Schools. Kindergarten-12th grade (not counting Transitional Kindergarten) enrollment has gone from 743 in 2016, to 715 in 2017, to 707 this year. For a moment this summer, enrollment dipped below 700 for the first time Supt. Chad Anderson could remember. That number includes 15 kids with a Milroy address (one senior, two juniors, two sophomores, six freshmen and four eighth-graders) and 45 students with a Balaton address (eight seniors, six juniors, eight sophomores, 11 freshmen, sixth eighth-graders and six seventh-graders). It should be noted that Balaton is part of the TAPS District and 100% of the funding goes to TAPS, while Milroy students who come to Tracy in grades K-6 are open-enrolled into the district. Anderson said students with a Milroy address who come to TAPS in grades 7-12 are still Tracy Area Public School students, but Milroy gets 10% of the funding for each student because of the tuition agreement. Milroy has its own district and is not part of TAPS.

“I expected enrollment to start out the same as we started last year, but we are actually down a few more students than expected,” Anderson said. “From this point on enrollment will continue to decline. (Now) will be the highest number of students for the year, but it will start to decrease from here. We have a larger than expected kindergarten class which brought us up, but we had some families leave the district which brought our numbers down.”

See this week’s Headlight-Herald, for more on this article.