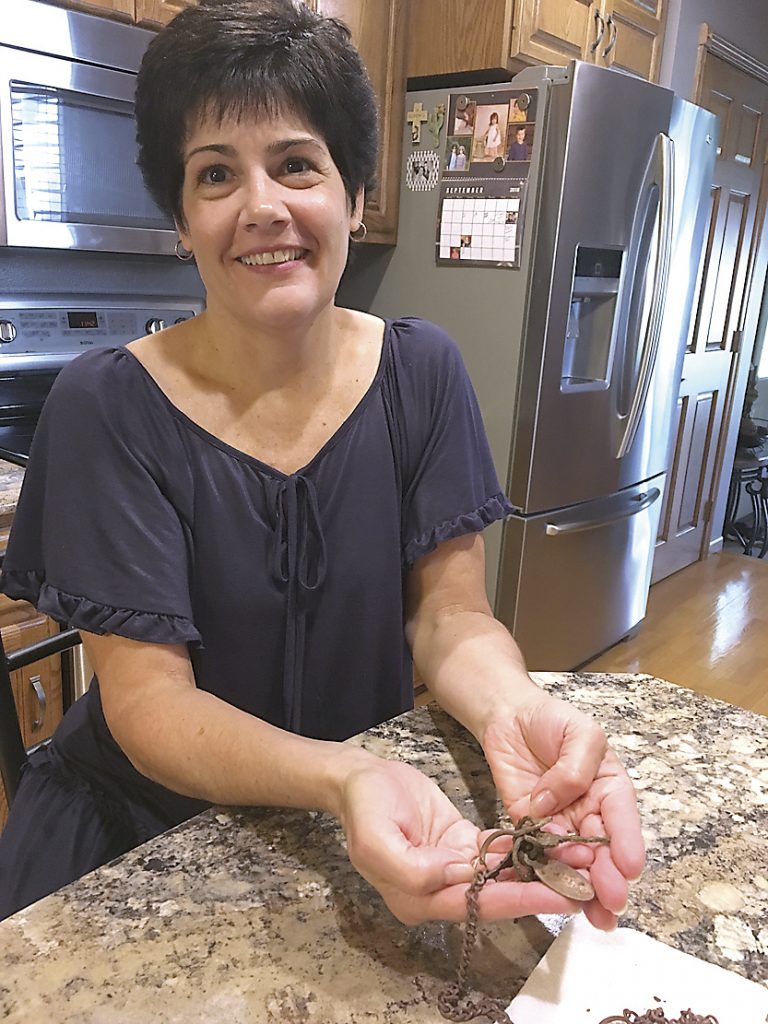 A long time ago, former Tracy resident Cyril Brasket once experienced that frustration after losing his keys. More than six decades later, they have turned up.

Tammy Haecherl, who lives on 8th Street with her husband, John, is now in possession of the keys that are attached to a copper key chain. They are very rusty and even corroded, but they are in her possession nonetheless, and she would like nothing more than to get them back in the hands of Brasket family member.

“We took our deck off back (behind the house) and we’re putting a patio in, and John had to dig deeper down,” Haecherl said. “When he dug down, he found these. He threw them off to the side and they kind of laid there for a few days. Finally I’m like, ’This is kind of cool. I should clean them up.’”

Haecherl did just that. She used vinegar and water to clean the copper keys, and “I could see that there were words on there. I thought, ‘how else can I get it a little bit cleaner?’”

Through further research, Haecherl learned that she could use ketchup to get the keys and the key chain even cleaner.

“I let it stay on there for a while,” she said. “I scrubbed it a little bit more and it got so I could read it. On there it said something about ‘If found, return to this Brisket’ — at the time I thought it said Brisket because it wasn’t all clean where the name was.”

The next day, as she was getting her hair done, Haecherl was looking at a 1953 class reunion photo in the Headlight Herald that included her husband’s aunt.

“Then, I don’t know why I was looking through the names, and Richard Brasket was in there,” she said. “So I went home and cleaned it a little bit more and sure enough it said ‘Cyril Brasket.’ It was very weird that I saw (the photo) after we found those keys.”

Haecherl tried to connect with Richard through Facebook but has yet to get a response from him.

“He hasn’t been on his Facebook page since 2000,” Haecherl said. “The picture on Facebook is him on there though.”

A month or so after finding the keys, Haecherl, who isn’t out for any kind of monetary reward, still can’t get over the irony of finding the keys one day and seeing that photo shorty thereafter.

“It’s just so weird,” she said. “It’s like, ‘Why didn’t we just throw them away when we found them’? I mean, they were dirty, why did I even clean them up?”

Haecherl has lived in her current home on 8th Street for more than 30 years. The Braskets lived on Rowland Street, between 8th and 9th streets.

“I don’t know if they were neighbors and were visiting, or what,” Haecherl said. “Someone also mentioned the tornado, too, but my mom said it really didn’t do too much on this end of town.”

Cyril was one of the oldest of eight Brasket children and eventually moved to the Twin Cities. Their father, Curt, worked on the railroad.

Neal “Corky” Vahle was close to the Brasket family. He graduated in 1950 with Curt Jr., who played tuba in the band. Vahle called Curt Jr. a “chess genius,” holding the Minnesota championship for many years and also scoring on the national level. Denis Brasket was three years older but was one of Vahle’s best friends.

“The Braskets were all very smart,” Vahle said. “(Curt Jr.) learned to play chess in my house on a chess board my aunt gave me for Christmas when I was in the eighth grade.”

Vahle said the family came to Tracy from Wanda.