‘Keep smiling’ … not a problem for inductee Dennis Moore, Class of ’65

Every inductee into the Tracy Area High School Wall of Fame is distinctive.

None may be more unique than Dennis Moore.

Moore’s resumé includes: public address announcer, outdoorsman and Lions Club member. And then there are his aliases, including one near and dear to his hometown friends in Tracy: “Smiley the Clown.”

Always the entertainer, the 1965 Tracy High School graduate who grew up on a farm on Lake Sarah and still entertains the masses at the annual Box Car Days parade, will be inducted along with the late Elizabeth (Bjerke) Hook into the TAHS Wall of Fame at this year’s American Education Banquet, which takes place at 6:30 p.m. Thursday, Nov. 15, at The Caboose.

“I was honored and humbled when I received the phone call from Superintendent Chad Anderson that I had been nominated for the Tracy Area School District Wall of Fame,” Moore said. “I have fond memories of my days at Tracy High School.”

Elizabeth Hook was a force, both in and out of classroom 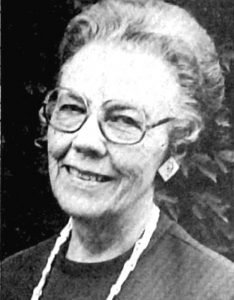 As a young girl growing up in Tracy in the 1940s, Connie (Bjerke) Almquist was a bit awed by her Aunt Elizabeth.

“I have this image of her driving up in a smart-looking sedan when I was five or six,” the Minneapolis woman recalls. “She had her own car, which was very unusual for those days. She was an independent woman who knew her own mind and wasn’t afraid to make her own way.”

“Aunt Elizabeth” (Bjerke) Hook was a 1929 Tracy High School graduate who had a teaching career that spanned 40 years.

After retiring from teaching in 1972, Elizabeth Hook was instrumental in St. Mark’s Episcopal Church becoming Tracy’s first museum, and was its volunteer curator and caretaker.

For more on these articles, see this week’s Headlight-Herald.