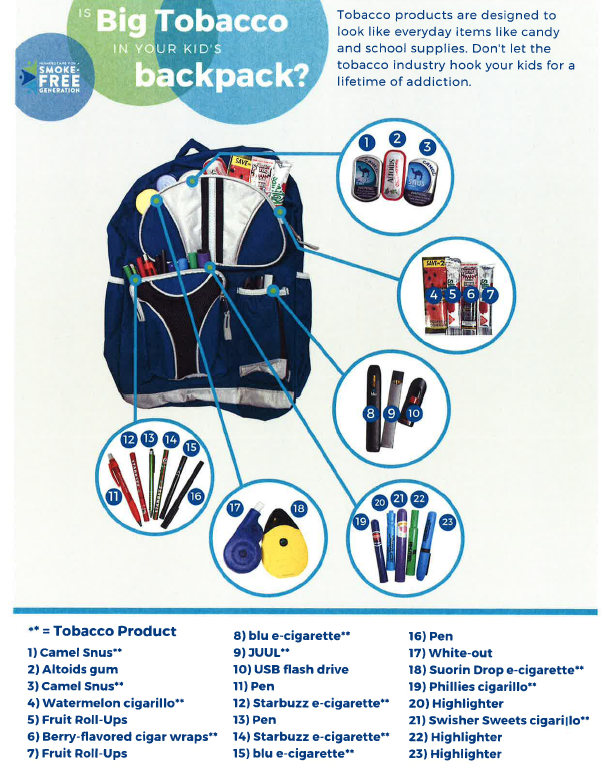 It doesn’t have quite the ring to it as the Motley Crue remake of Brownsville Station’s 1973 classic “Smokin’ in the Boys Room,” but while times have changed since small clouds of smoke wafted their way out of high school bathrooms in the ‘70s, there is renewed concern about what goes on behind closed stall doors. The only difference is that Marlboros and Camels have been usurped by vape pens and Juuls. No, these aren’t your parents’ cigarettes, but they’re just as problematic — for schools and for the kids who use them.

Tracy Area High School Principal Kathy Vondracek said a couple students were caught with vaping devices during the last school year, and there have been issues this quarter as well.

The big problem with Juuls, she said, is the ease at which students can conceal them.

“They’re too easy to hide,” she said.

Juuls are a type of vaporizer or e-cigarette. They are discretely designed — so much so in fact that if you didn’t know what you were looking for, chances are you wouldn’t know one if you saw one.

“There are ones out there that look like flash drives — you’re going to actually think it’s a flash drive,” said Vondracek. “We found one of those in the school (this year). Someone dropped it and it was picked it up and brought to the office. We couldn’t find out who it belonged to.”

Juuls and other vaporizers work by heating up a cartridge that contains oils to create a vapor that can be inhaled. Many people, youth included, justify vaping by saying it is a safe alternative to smoking traditional cigarettes. However, studies have shown that’s simply not the case. Some vapes, according to the open-access journal Enivronmental Health Perspectives, include the chemicals dactyl and acetoin, which are unsafe to inhale. Others that claim to be nicotine-free are actually not, according to research and studies.

Indeed, schools that fought back against Big Tobacco and worked to keep cigarettes off campus in the ’70s and ‘80s are in a new fight against a new opponent.

“Back in the day when they started the tobacco education in the elementary classrooms, that’s when smoking started to decrease among adults and teenagers,” Vondracek said. “It has to start with our young people.”

Vondracek is well aware that students are under the impression that the new devices are safer that cigarettes. They are sold to the public as a smoking cessation tool — a way to help people quit the habit — but things like Juuls, which were invented in 2007 by two Stanford University graduates, are extremely popular among teens as well.

According to the latest U.S. Census, more than 10.7 million youth between the ages of 12-17 are at risk for using e-cigarettes. The U.S. Food and Drug Administration says there has been a 75% increase in Juul use among teens in 2018, compared to 2017.

“Students think it’s not harmful; they don’t understand that it’s just as harmful, if not more harmful, than regular cigarette smoking,” Vondracek said.