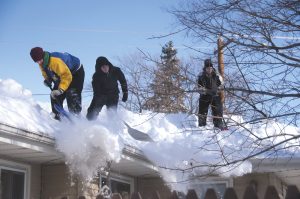 The beautiful majesty of a winter’s morn is fine in December, but at this time of the year — given the amount of snow that has fallen after a brief January thaw — that beauty is hiding potential dangers.
The most common winter woes include snow removal on city and county roads and state highways. But look closer — and up — and there are more potential problems buried under snow and ice: roofs.

Snowfall after snowfall has left inches and even feet of snow piled up on rooftops all over town. And that snow can lead to big-time problems, especially considering more is on its way.
“There is a lot of weight on these roofs — tons of weight,” said Michael Eng, a roofer and new Tracy resident who along with his three children have been working this winter to shovel snow off the rooftops of homes in Tracy. “There are some that could collapse.”
And that’s not the only issue. Eng said plugged vents can lead to problems, too, inside homes.
“That’s very important — it’ll kill you,” he said. “That’s carbon monoxide. Everything is buried on some roofs, through every neighborhood. Your sewer stacks need to be open, your vents need to properly breathe. They have to be open.”
Eng has been delivering flyers around Tracy, not to drum up business for himself, but to remind residents not to forget about what’s going on above them.
“Ice is a really bad thing, too,” he said. “Ice will destroy your roof. If you have an ice dam, it will climb up in there, it will leak, it will destroy your roof. It’s very important to get that ice off. Some of this stuff is already froze on. This is worse than what you think.”
Dale Johnson III, who owns his own construction business in town, is concerned more about those large ice dams that form above gutters than the weight of the snow, which he said is lighter than the heavy, dense snow that typically falls in the spring.
“Obviously getting the snow off the roof stops the melting from the heat loss where the wall ties into the truss, so if you remove all the snow you help with the ice dams,” Johnson said. “The big reason for getting the snow off the roof is the people who have ice dam issues have ice dams that are backing up under their shingles and water that’s running into their roof.”
Johnson, whose crew has been removing snow from roofs consistently over the last week of snow, said a lot of heat loss occurs — especially in older homes — where the walls meet the rafters. That melts the snow and results in ice dams.