After a mostly-washed out 2018, Laura Ingalls, and her family and friends return to the stage next week as Fragments of a Dream enters its 42nd year 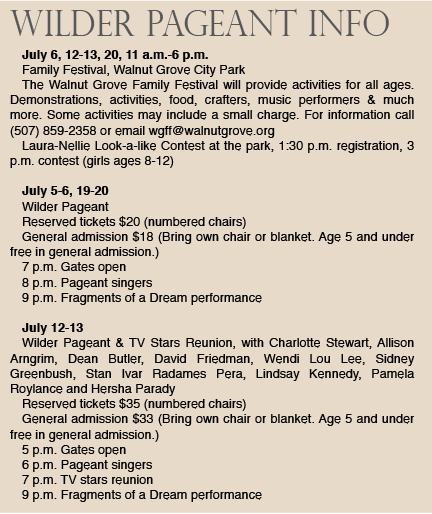 Bill Richards laughs when he thinks about last summer’s flood and what it did to the annual Laura Ingalls Wilder Pageant.

Laughs? Right — not because he took enjoyment in watching the waters rise, or having to cancel shows, but because of what came after.

“When a disaster happens, the best and the worst show up,” he said, momentarily shedding his normal sarcastic tone as he recalled all the folks who chipped in to help at the pageant site after the flood. “You had the worst with all the water, and you had lost customers and lost revenue, but then you had the best — you had people out there working their butts off when they should’ve been home pumping out their basements, you had people making donations, and we cleaned that place out better than it’s been cleaned in years.”

The July 3 flood totally wiped out opening weekend last year. The show went on the second two weekends, and organizers tried to add some benefit performances on the Thursday nights of the second and third weekends but, of course, they were rained out.

“We had a sump pump raffle that I lost money on,” Richards joked. “It seemed so fitting. And one of the local people got it for their daycare and put it in their basement, so that was good. But most people thought it was the funniest thing in the world. For a buck apiece, I lost huge, but it was fun to do.”

Wilder Museum Director Amy Foster said last year was a learning experience if nothing else. It was, however, very depressing, because of all the planning that goes into putting the show on every July.

“Even though (the museum) is open April through October, you really plan for July,” she said. “That is the key. But (last year) the people weren’t here, the gift store items didn’t sell. We missed a whole pageant in the gift store. It takes a toll on you — you gear up for it all year long … “

Rebuilding from July 2018 has been a huge undertaking. The pageant committee raised $8,000 through a Gofundme fundraiser, and they received a grant from California for about $8,500. The Walnut Grove Area Foundation also gave money, which was used to do some extensive work on buildings at the pageant site. They also attempted to recoup losses through FEMA but were unsuccessful.

See this week’s Headlight-Herald for more on this article.

The Tracy Area Headlight Herald will continue its preview coverage of the 42nd Wilder Pageant, Fragments of a Dream, in next week’s paper with thoughts from the cast, as well as a story on the 45th reunion, including thoughts from the stars who will be in Walnut Grove on July 12-13 to celebrate the anniversary.