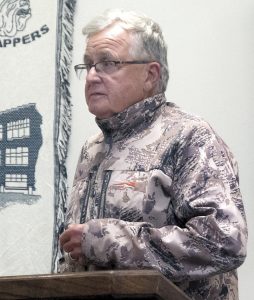 Dobson, a beloved Tracy resident since 1948, used all of those 13 minutes to share his thoughts and concerns about his hometown and the direction it’s been going. Although his eyesight may be failing, Dobson is not blind to how the controversy and vitriol that has been a constant at City Hall this summer has bruised the city’s image.

Dobson started his speech by sharing a story about a time he sat down in a local establishment with two men who were talking about Tracy. One remark in particular during that discussion stuck with him.

Monday’s meeting turned out to be an unavoidable culmination of a summer full of strife and controversy at City Hall. Over the past couple of months, the EDA has lost two members — one, Jeff Salmon, who was kicked off the board, the other, Mark Seager, who resigned. Personal conflicts have been at the eye of the storm that will continue to cast a shadow over the town this week.

Dobson’s typical audience is in a church, and on Monday, he preached to the council and implored them to work hard to restore Tracy’s reputation after a summer of fingerpointing, name calling and overall dissension. As a means to drive home his point, Dobson chose to at times direct his impassioned talk, not just to the council as a whole, but to its members as individuals, some who have lived in Tracy all their lives. He joked with some of the council members, and shared his appreciation with all they do for the city and the sacrifices they have made.

“We need to do some bridge-building,” he said.

Dobson also recalled a story about a businessman who came to town who was told, as he put it, to “be sure and watch your back,” Dobson said. “Now what kind of a welcome is that? Why would someone we want here … someone who would be an asset to our community, be warned to watch their back?”

Dobson said today, more than ever, sarcasm rules over kind words in town, and criticism has taken the place of praise.