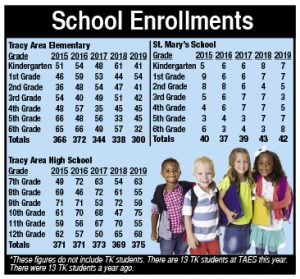 Enrollment continues to trend downward at Tracy Area Public Schools, and that means less revenue for the school district.

“The funding that we receive is largely based upon student enrollment,” said TAHS Supt. Chad Anderson. “We will have currently the same or more the amount of expenditures with much, much less revenues. What’s happening with enrollment trends and where we’re at is not sustainable if we continue down this road. We have to have discussions and make decisions.”

Last year, the district was actually up 10 students, and Anderson said the decline this year came as no surprise.

“This year we were expecting to go down,” he said. “The senior class was 65 and we brought in 41 kindergarteners.”

Kindergarten-12 enrollment as of this week sits at 675, compared to 712 from a year ago. The drop is even more precipitous when compared to a few years ago, when enrollment stood at 743 in 2016.

Enrollment at Tracy Area Elementary School is down a bit from the May 2019 projection, mostly because the school had its largest class leave the school this past fall — 60 graduated to the high school — and has its smallest class entering the sixth grade: 32.

“Once are smallest group comes (to the high school), everything is pretty flat,” TAES Principal Michael Munson said. “We are mid-40s throughout the whole elementary except for the first-grade, which is 55.

The trend looks to continue in the near future. This year’s senior class is 68, and estimates will be about 35-50 for the next kindergarten class.

“You can look at the trends from the last few years, and it’s been slowly declining,” Anderson said. “It’s something we predicted and knew it was coming. However, the time has now hit and it’s time we need to start talking a little more about it.”