Local farmers can take their pick of which month to blame for such a wet 2019, and late planting and harvest season. But if they want to focus their ire on one four-week period in particular, they need look no further than the shortest month of the year.

February 2019 brought a Tracy record 34.72” of snow to go on top of the nearly 20 inches that fell in January. And don’t forget, all that moisture came after a very soggy 2018 that saw nearly 50” of precipitation in Tracy.

Indeed, the winter of 2019 was another wet one. From October to April, Tracy received nearly 90” of precipitation — most, of course, coming in the form of snow, and some of that was of the very wet variety (17.4” in April, a month not normally associated with snowfall that also brought with it an ice storm that toppled numerous power lines in the area). 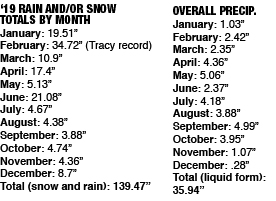