“Catching Up With …” is a new periodic feature of the Tracy Area Headlight Herald and is designed to highlight the exploits of Tracy Area High School graduates who have been out of high school for at least a decade. If you have a suggestion of someone you think should be included in this feature, let us know by emailing per@headlightherald.com 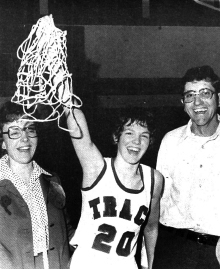 That’s how much time had passed in 1981 between state tournament appearances for the Tracy High School basketball program. Today, after 40 more years have passed, members of the ’81 Scrapper girls’ basketball squad — otherwise known as “Mik’s Chicks,” fondly look back on one of the most memorable moments of their high school athletic careers.

It was 1940 when the Tracy boys’ basketball team reached state, marking the first time a basketball team had done so. This story is a bit different, however, as the 1981 Scrapper girls represented the first female team to reach such heights.

“It was quite an achievement, I would say,” said senior guard Tammy (Brock) Peterson, whose game-winning shot with 2 seconds left in the Region 3A finals against Madison was the exclamation point on the Scrappers’ 1981 history-making story. “It was like, ‘We did it, we’re going to state, can you believe it? We were very proud to be the first Tracy girls’ team to go to state and represent Tracy.”

Peterson said many girls’ sports were offered at the time, even as kids entered the seventh grade, and all girls’ sports programs — basketball, volleyball, track and tennis — were strong.

“At the time, I didn’t even think about being the first girls’ team to reach a state tourney, I was just excited to finally be regional champions,” said Janet (Vandendriessche) Holland, a senior on the 1981 team, who for 24 years has worked at Oracle Corporation in Arizona as a sales business architect. “That being said, I think we always had the mindset that we would eventually reach that state tournament level, and it was an honor to represent our school at the state level.”

The year 1981 marked the seventh year of existence for the girls’ basketball program and was the middle of the peak for girls’ hoops in Tracy at the time.