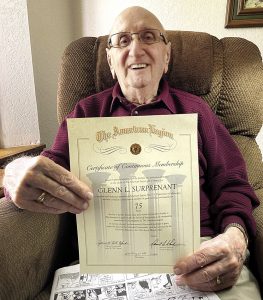 Memorial Day gives us a chance to honor those who have given the ultimate sacrifice for our country. From the Revolutionary War to the War on Terrorism, approximately 1.3 million American military have died in a time of war, Tracy Area High School Supt. Chad Anderson shared during his Memorial Day presentation in Tracy.

“But they are so much more than just a number or a statistic or a name on a military marker,” Anderson said. “They had families. They were brothers, husbands, sons and daughters. They were somebody’s best friend, somebody’s classmate and probably somebody’s sweetheart. The vast majority of these deaths were young men between the ages of 18 and 30 that never got a chance at life. Their hopes and dreams and aspirations for the future ended on a battlefield or in the skies over a battlefield, in an enemy prison or in a hospital bed. They gave the supreme sacrifice to gain our independence and secure our freedom.”

Anderson reminded those in attendance that while we decorate their graves and silently reflect on their service, the intended purpose of Memorial Day is for our nation to remember and honor those who have died in the defense of freedom. It is not a joyous and patriotic holiday.

“It is a day on the American calendar that is meant to remind us of the price of freedom,” Anderson said.

“Every one of us this year has had thoughts of losing loved ones due to COVID-19 very similar to what families faced when loved ones headed off to war, not knowing if they would return,” Anderson said. “But just like every battle in the past, America has prevailed and we are leading the world once again.”

See this week’s Headlight Herald for more on this article and Memorial Day programs.