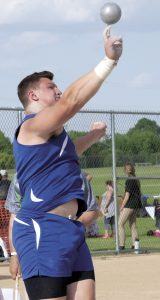 He might not have been at his best, but Tony Nelson last week captured his second straight Class A shot put title

Tony Nelson left the St. Michael-Albertville High School track and field complex last Thursday with a sense of disappointment in his performance in the State Class A shot put competition.

He also left with a gold medal around his neck. Not bad for an off day.

Even though the recent Tracy Area High School graduate’s performance failed to live up to his high standards, Nelson successfully defended his 2021 Class A title with a long throw of 57’-3”, outdistancing his friendly rivals, Francis O’Malley of Montevideo (54’-07”) and Adrian/Ellsworth’s Cole Boltjes (53’-11”).

“I felt good — my body was prepared and everything — but something was just off,” Nelson said shortly after leaving receiving his medal Thursday. “(Wednesday’s) practice was great, I had one out at 65 (feet). I was just … awkward today.”

Warm-ups aside, Nelson had a very inauspicious start to his competition.

As he did in the Section 3A finals a week earlier in Pipestone, Nelson fouled on his first throw Thursday. Then he fouled again, leaving him one chance to defend his title. For his third throw, he shifted from his newly-adopted spin technique back to a safer power throw.

His thoughts going into that final throw: “Get one in,” he said. “I was getting too close to the toe board. I was just uncomfortable today.”