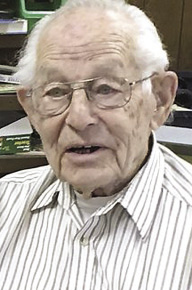 One of Tracy’s most influential difference-makers from a past era, Bernie Holm, died last week at the age of 94.

Holm, a U.S. Navy veteran, did it all in Tracy during his younger years, and his love for his community touched those young and old.

He and his wife bought Tracy Floral in 1960 from his wife Netter’s parents, and together they ended up running the business for 35 years. The Holms sold the business to Tam Schons and Pam Cooreman in 1995.

“He called us up and told us we were the only people he wanted to sell his business to,” Cooreman said. “It never worked out that (husband) Kendal and I would do it together, and one day Tam was upset with the company she worked for … and I said, ‘Well, you know we could always go buy the greenhouse.’ We found Bernie at the cemetery one day and asked how much he wanted for it.”

Holm stayed on for a year to help Pam and Tam with the transition of taking over the business before getting out entirely.

“I always got along great with him,” Pam said. “I thought he was a sweetheart. He  had the best interests of Tracy in his heart. He used to get mad at me when I called him Bernard — he said, ‘You know, nobody else gets to call me Bernard, right?’”